The MSAM-YM03 Montero is a mobile suit featured in the Gundam Reconguista in G anime series.

The Montero was developed for long-distance invasion by itself, and the high-power thrusters on the shoulder-mounted wings enable high-speed flight in the atmosphere without the assistance of the sub-flight system. These wings also serve as shields. Its cockpit has a spherical shape similar to that of the Grimoire. The Montero's main weapon is a double-edged beam javelin that also function as beam sabers in close range and can emit beam wires for mid-range combat. The beam javelin can be separated into two halves during use and for storage on the shields. Other weapons include a dedicated beam rifle that saves energy while maintaining the same power as existing rifles, two head vulcan guns, six missiles stored on the left and right side skirts, and a forearm-mounted wire hook similar to Grimoire's. 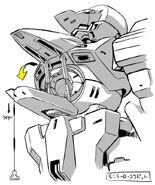 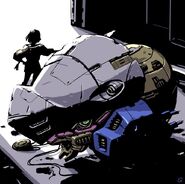 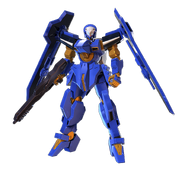 Retrieved from "https://gundam.fandom.com/wiki/MSAM-YM03_Montero?oldid=466689"
Community content is available under CC-BY-SA unless otherwise noted.