The MSA-099 Rick Dias [Stutzer] is a custom mobile suit that appears in the manga/novel Advance of Zeta: The Flag of Titans, and is an enhanced form of the RMS-099 Rick Dias equipped with various enhancement parts. Although its combat effectiveness was increased substantially from a regular Rick Dias, overall, it was an unbalanced and cumbersome unit that only a veteran pilot like Gabriel Zola could use effectively in battle. As with previous Stutzer (German for "Fancy") units, it features the slogan "Zeon Alive!" stenciled on the upper-body armor.

This Stutzer unit was developed at the expense of mobility due to the additional options and Stutzer armor attached as a measure to counter the latest mobile suits of the Titans and Earth Federation Forces, it is also capable of being configured into a Cruising Mode, However, the Rick Dias [Stutzer] itself is not a Variable (transformable) mobile suit. The prototype equipment was created by Anaheim Electronics and the development of the Rick Dias [Stutzer] made extensive use of the combat data obtained by Gabriel Zola and his comrades from machines such as the MS-09R Rick Dom [Stutzer] that Zola piloted during their time as Zeon remnants before joining the AEUG. The head of the Rick Dias [Stutzer] has a face guard to protect its mono-eye, giving it the appearance of a Gundam-style twin eye.

The two binder units on its back are enlarged versions of the booster binder units used by the normal Rick Dias, and the addition of missile pods turns them into what could be called “armed AMBAC limbs.” The base Rick Dias is unmodified apart from the wire cutter on its head. Another wire cutter and a set of micro missile launchers are installed in the protective armor that covers its upper body, a stabilizer is attached to its back, and a winch unit is installed on its chest. This winch unit can be fitted with a beam rifle or a large wire-guided claw that opens to reveal a beam cannon.

This enhanced machine demonstrates its special characteristics not in small-scale combat against other mobile suits, but in large-scale battles spanning a wide combat area, such as fleet battles and fortress attacks. Equipped with countless missiles which can attack multiple targets simultaneously, it often serves as an attack vanguard, opening hostilities with a missile attack from the front lines, Although Zola, who demanded mobility from his machines, disapproved of its extra weight.

The long shield booster is an AEUG device whose development was inspired by the shield booster used by the Titans Test Team. Equipped with a mega particle cannon as well as thrusters for propulsion purposes. With the long shield booster attached to its back, the Rick Dias [Stutzer] can assume a cruising form which resembles the RX-178+FXA-05D Super Gundam. Although the Rick Dias itself cannot transform, this cruising form allows it to orient all its thrusters in the same direction, giving it the same high mobility as the mobile armor form of a transformable mobile suit. 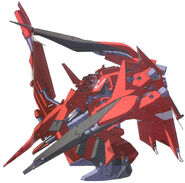 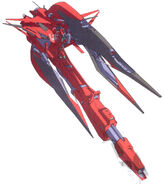 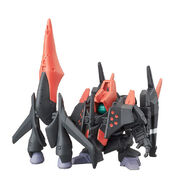 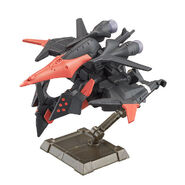