The MSA-014 Σ Gundam (aka Sigma Gundam or σ Gundam) is a Mobile Suit appearing in an issue of Model Graphix magazine and the novel Original Gundam Story: Inner Gundam Space of Ageta. It was illustrated and modeled by Yukio Agarita.

The Σ Gundam is a transformable mobile suit developed under Anaheim Electronics's Project Zeta, going to the codename Sigma (σ) Gundam. It is proposed under the model number RX-183 and part of its development is handled by Anaheim before transferring the development to the Murasame Research Institute. Initially developed from the captured RX-178 Gundam Mk-II, the Σ Gundam is the first mobile suit to transform into two separate components and utilize more of its movable frame. The two components are composed of an A-Part and B-Part, both of which are controlled by two pilots at the same time. The A-Part is equipped with a Psycommu System, allowing it to have better response and a powerful Minovsky Craft Propulsion System.

The Σ Gundam is also armed with powerful weaponry. Since its made for Newtypes in mind, it is equipped with several Psycommu Missiles and a pair of Psycommu Hands. The unit is also equipped with a High Mega Cannon on its head and four beam cannons.

It is believed that the Σ Gundam is built after the Anti Earth Union Group captured several Gundam Mk-IIs and were sent to Anaheim for extensive research and development. Unknowingly during development, it was transferred into the Murasame Research Institute to complete the MS. Its overall technology inspired several mobile suits fielded in the Gryps Conflict such as the ORX-005 Gaplant and the MRX-007 Prototype Psyco Gundam. 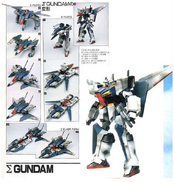 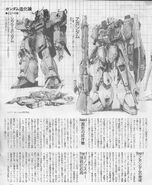 Retrieved from "https://gundam.fandom.com/wiki/MSA-014_%CE%A3_Gundam?oldid=397595"
Community content is available under CC-BY-SA unless otherwise noted.