The MSA-008 (RGM-87) Bar-GM is a mass-produced mobile suit that appears in Under the Gundam: Double-Fake.

With the end of the Gryps Conflict and dissolution of the Titans, the Earth Federation initially scheduled the retirement of many RMS-154 Barzam units that survived. Due the Barzam's performance, the EFF sought to utilize the remaining machines and they were converted into the Bar-GM, which was also placed into limited mass production, re-designated and formally adopted as the MSA-008/RGM-87. The Bar-GM features many components from the mainstay Federation and AEUG MS at the time, such as the RGM-86R GM III, drastically changing its looks from the original Barzam.

The standard ranged armament of many mobile suits, the particle beam fired from a beam rifle can penetrate almost any armor not treated with specific counter-measures.

The standard close range armament for most Federation mobile suits. The beam saber is a small device held in the mobile suit's hands when operated and is powered by a rechargeable energy capacitor. It can cut through any armor not treated with anti-beam coating.

The Bar-GM was known to have been deployed in UC 0090 by EFF forces to resist an attack by the anti-Earth Federation militant group Colorde on Texas Colony at Side 5. To avoid reminiscence of Titans, the Bar-GM was modified to give them GM-type look. 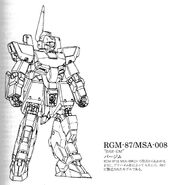