An Early Warning And Control (EWAC) mobile suit based on the MSA-007 Nero. Although Minovsky particle interference prevents the use of radar and radio communication, the dispersal of these particles was prohibited by the Granada Treaty that ended the One Year War, and so radar search and detection is still effective in areas with low Minovsky particle density. The EWAC Nero is designed to detect enemy machines and gather intelligence on them. Then relay this information to the Combat Information Center (CIC) aboard its mothership.

The huge head of the EWAC Nero contains long-range radar antennas and is equipped with multi-sensors for passive intelligence gathering. While it's backpack contains data processing and communications systems. The information it gathers can be relayed in real time via radio and laser signals, or recorded onto the data pods stored in its backpack for later recovery. The EWAC Nero can also be equipped with Remotely Piloted Vehicles (RPV), wired cameras, and various other reconnaissance equipment. It's two-seater cockpit block houses a pilot and an operator to control all this equipment, and propellant boosters are attached to extend its operating time for long missions.

Because of the design of this suit was based solely on being a detection suit, it was given no armaments.

The EWAC is a set of equipment that is attached to the mobile suit and is designed to detect enemy machines and gather intelligence on them.

At the beginning of the Pezun Rebellion, a data pod recovered from an EWAC Nero records the destruction of the Federation Forces’ 127th Squadron at the hands of New Desides mobile suits. A few of these machines are also assigned to the command ships of the suppression fleet that is dispatched to defeat the New Desides. 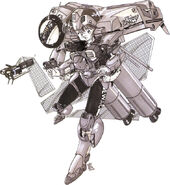 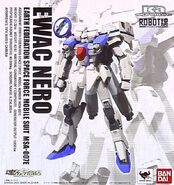 Retrieved from "https://gundam.fandom.com/wiki/MSA-007E_EWAC_Nero?oldid=496334"
Community content is available under CC-BY-SA unless otherwise noted.