The MSA-005 Methuss is a mobile suit from the series Mobile Suit Zeta Gundam.

The Methuss was the first true transformable mobile suit produced by Anaheim Electronics for the AEUG under their "Project Zeta". It served as a testbed for the transformation structure and the gathered data was later used in the development of MSZ-006 Zeta Gundam and the MSZ-008 ZII. Like the Zeta Gundam, the Methuss was very fast and agile in mobile armor mode. However as a prototype unit, it was only armed with two arm beam guns and six beam sabers. During combat, the Methuss can also serve as a support machine, acting as a second power generator for the upgraded Mega Bazooka Launcher.

One on each forearm, the pair of arm beam guns flip forward when in use, and are powered directly by the Methuss' generator. The particle beam fired from the weapon can penetrate any armor not treated with specific counter-measures. Each arm beam gun is power rated at 2.0 MW.

A small device held in the mobile suit's hands when operated and is powered by a rechargeable energy capacitor. The beam saber emits a blade of plasma contained by an I-Field and can cut through any armor not treated with anti-beam coating. The Methuss has six beam sabers, three stored in each leg, and they can also emit an alternate axe-shaped beam blade each.

The Methuss can be fitted with a grenade launcher in its left forearm, below the arm beam gun, that can fire several rounds.[2]

The shield is a simple defense used to block most incoming projectiles. It is also treated with an anti-beam coating to defend against beam weapons, however the coating gets gradually burned away each time a beam strikes it until it is rendered useless. The Methuss can optionally equip two shields, one mounted one each side in mobile armor mode.

The same beam rifle as used by the MSN-00100 Hyaku Shiki, it has a power rating of 2.8 MW and powered by a replaceable e-pac. The particle beam fired from a beam rifle can penetrate almost any armor not treated with specific counter-measures. The Methuss can optionally equip four of these beam rifles, two mounted on each side in mobile armor mode.

A warhead that releases a cloud of gas specially formulated to absorb mega particle beams, the resulting beam-diffusing "curtain" reduces the destructive power of enemy beam shots as they pass through it. Used by several Methuss units in the manga, Mobile Suit Gundam ZZ Side Story: Mirage of Zeon.

Despite being a prototype, the Methuss was still assigned to the AEUG flagship Argama and first used by Reccoa Londe in UC 0087. Afterwards, it was assigned to young pilot trainee Fa Yuiry. As she wasn't a terribly good pilot, the Methuss was often heavily damaged, but it turned out to be easy and quick to repair so it would be ready for the next engagement. Fa and the Methuss managed to survive the Gryps Conflict.

The Methuss briefly remained in service during the First Neo Zeon War, again used by Fa against the Neo Zeon team lead by Mashymre Cello. The Neo Zeon attacked the Argama while it was berthed at the Shangri-La colony and, following the Argama's escape into space, the Methuss was heavily damaged. Fa, torn between her duty to the AEUG and her desire to take care of then-mentally-crippled Kamille Bidan, left the Argama and returned to Shangri-La.

In October of UC 0088, admist the First Neo Zeon War, the AEUG deployed more Methuss units. These featured a new color scheme and were equipped with beam diffusing missiles, to create a beam diffusion "curtain", as the Solar System II was being prepared by AEUG forces for an attack against the Neo Zeon's asteroid base, Axis. 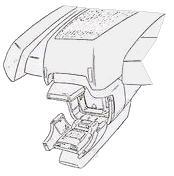 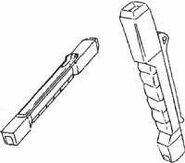 Sazabi standing in front of green and blue Methuss 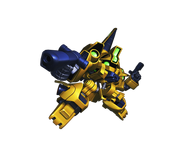 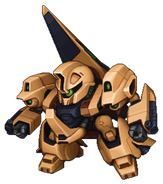 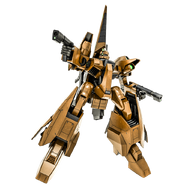 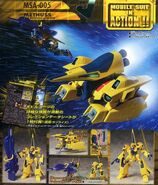