The MSA-005K Guncannon Detector (often misspelled as "Dictector", and also known as"Guncannon DT") is a mobile suit developed from the MSA-005 Methuss, and first featured in Z-MSV. Its design is later updated and featured in the Mobile Suit Gundam Unicorn novel, its OVA adaptation and the television re-cut.

A ground artillery mobile suit for mid-range support, it was co-manufactured by Karaba, an AEUG support organization, and the Anaheim Electronics during the Gryps Conflict. It used the movable frame of the MSA-005 Methuss as a base, and taking references from the RX-77 Guncannon, it has two Vulcan guns and a pair of beam cannons. Despite this, the suit is not related to the Guncannon, its name was given by one of Karaba’s leader, Hayato Kobayashi, who had piloted a Guncannon during the One Year War.

Other weapons of the suit are a shoulder-mounted beam gun and a handheld beam rifle, and almost all of its armor was newly designed. By using the transformation mechanism of the Methuss’ frame, the Guncannon Detector can transform into its Artillery Form by kneeing and unfolding its front armor under its waist, forming a three-point support system for stable, highly precise artillery fire. This transformation process is instantaneous thanks to the frame’s excellent strength and responsiveness.

Mounted on the head, the pair of vulcan guns are small caliber shell-firing weapons. They have low firepower, but their rapid-fire capability makes them useful for destroying missiles, deter closing in enemy machines, and the likes. The Z-MSV version has 30mm vulcan guns, while the Gundam Unicorn version has 60mm vulcan guns that offers sufficient power in close combat, and said to be of the same model as those on the MSA-003 Nemo and other mobile suits.

Attached to the right shoulder’s front armor, it is a semi-automatic beam weapon for close combat. Despite its low output, it can automatically detect approaching enemies and intimidate or restrain them when the suit is in Artillery Form. It has no problem destroying mobile suits. Output 2.3 MW.

A pair of beam cannons are mounted on the back and positioned over the shoulders. Contain an improved version of the system used on high-output beam cannon, which was adopted by a few mass-produced machines. The beam cannons are directly connected to the suit’s generators, but they also have a CAP system that serves as a spare circuit for applications and tactics that require one. Output 4.7 MW.

A custom beam rifle specifically made for the Guncannon Detector, it is created by combining various beam devices owned by Karaba. Although an improvised weapon, it later contributed to the verification of equipment procurement with multiple functions and uses. It was said to be excellent for practical uses. It has a power rating of 2.7 MW and is also integrated with a grenade launcher under its barrel for more firepower.

In UC 0087, the Guncannon Detector was manufactured by Karaba and Anaheim Electronics as a ground-use artillery mobile suit for mid-range fire support. It was known that two units were built and dropped by shuttle to North America. While one machine was destroyed in a failed landing attempt, the other was safely collected by Karaba. It was painted with a red color scheme and called Guncannon Detector by Hayato Kobayashi. The suit's total production number was unknown, with there being various theories.

Two Guncannon Detectors defending the Torrington Base in U.C. 0096 (from Gundam Unicorn OVA) 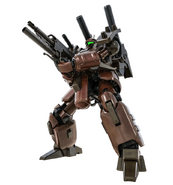 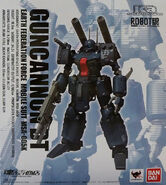 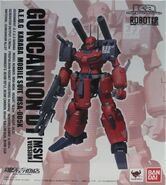