The MSA-004K Nemo III is a mobile suit that appears in the original design series, Z-MSV and later appeared in the OVA series Mobile Suit Gundam Unicorn.

The MSA-004K Nemo III is an improved armament version of the MSA-004 Nemo II designed for mid-range fire support. Its firepower is enhanced with the addition of a beam cannon on the back. The backpack's binder units also increased the suit's mobility and maneuverability.

Mounted on the backpack and rising over the left shoulder, the beam cannon not only drastically improves the Nemo III's firepower, but also allows it to function as a mid-range fire support unit. The beam cannon is powered by tank-like e-pacs on both sides of the backpack. Output 5.4 MW.

The standard close range armament for most mobile suits, it is a small device held in the mobile suit's hands when operated and is powered by a rechargeable energy capacitor. The beam saber emits a blade of plasma contained by an I-Field and can cut through most armor not treated with anti-beam coating. The Nemo III carries one beam saber.

The standard ranged armament of many mobile suits is the beam rifle. The particle beam fired from a beam rifle can penetrate almost any armor that has not been treated with specific counter-measures. The Nemo III is equipped with the same beam rifle used by the RMS-179 GM II; which has a power rating of 1.9 MW and powered by a rechargeable energy cap.

The MSA-004K Nemo III was developed by the AEUG based on the MSA-004 Nemo II, it was never mass-produced as intended and only used as an experimental unit.

One Nemo III was used by Federation forces during the Zeon Remnants assault of Torrington Base but was destroyed by Yonem Kirks's MS-05L Zaku I Sniper Type. 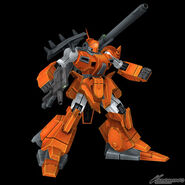 Retrieved from "https://gundam.fandom.com/wiki/MSA-004K_Nemo_III?oldid=456728"
Community content is available under CC-BY-SA unless otherwise noted.