The MS-50A Zaku 50 is a mobile suit that appears in the SD Gundam G Generation series of video games.

Developed around UC 0130, fifty years after the end of the One Year War, the now-declining Anaheim Electronics revisited its glory days with this anniversary mobile suit. Equipped with a pseudo mono-eye head and external power cables that were intended to provide it a nostalgic Zaku flavor, the gigantic Zaku 50 bears little resemblance to its namesake, replacing the arms with propellant tanks and mounting a pair of long grappling claws in place of legs. Its performance was impressive considering its origins, and its main armaments consisted of a large mega particle cannon mounted within its chest and a large beam saber stored in each "leg."

Although the Zaku 50 was made to revive Anaheim's failing fortunes, this did not occur. 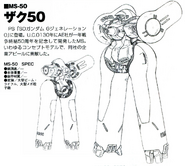 MS-50A Zaku 50 Back and Front Lineart

Retrieved from "https://gundam.fandom.com/wiki/MS-50A_Zaku_50?oldid=444083"
Community content is available under CC-BY-SA unless otherwise noted.