The MS-21D1 Dra-C Custom is a variant of MS-21C Dra-C first featured in the picture drama Mobile Suit Gundam 0083: Mayfly of Space 2.

The Dra-C Custom replaced the spherical shoulder thruster pods of the original Dra-C with a pair of thrusters from an unspecified Zeon's space-use assault ship. These thrusters enhanced Dra-C Custom's acceleration at the expense of mobility. The Dra-C Custom also forgoes the 40mm vulcan gun for conventional mobile suit right forearm unit. It is armed with a MMP-78 machine gun for ranged attack and retains the original Dra-C's beam saber equipped shield.

Later, the Axis forces deployed a heavy equipment form of the machine fitted with additional weapons in the form of a large gatling gun, sturm fausts and missile pods. While these weaponry enhanced its firepower, they also lead to a higher weight, resulting in even lower mobility. The Dra-C Custom [Heavy Equipment Type]s are often deployed as escort units for the MS-14J ReGelgu.

Made from battleship plating, the Dra-C Custom's shield has a beam saber for close combat. The shield also incorporates a small generator, an e-cap system and a cooling unit since the suit's own generator is insufficient for powering beam weaponry.

The beam saber emits high-energy Minovsky particles to form a blade-shaped I-field (via manipulation of electromagnetic fields), and then fills this I-field shell with superheated Minovsky particle plasma to produce an effective cutting blade. The Dra-C Custom is equipped with a beam saber with its hilt fixed at the underside of its shield.

A simplified, disposable rocket launcher. It has been in use since the One Year War due to its excellent cost performance. As the warhead is not equipped with a guidance device, it is extremely hard to use the Sturm Faust to hit a moving target accurately. However, it is still a highly destructive weapon. The Dra-C Custom [Heavy Equipment Type] mounts two of these on its shield, sacrificing the shield's defensive capabilities.

A new model machine gun with enhanced firepower to combat Federation Forces MS. Early type and late type models exist, with differences in the location and mounting of the grip on the latter. The MMP-78 is also integrated with a grenade launcher under its barrel for additional firepower.

A handheld, large, multi-barrel projectile weapon with a high-rate of fire. This weapon is used by the Heavy Equipment Type instead of the MMP-78 machine gun for higher attack power.

After the end of the One Year War, many of the Zeon remnants retreated from the Earth Sphere and went into hiding. The Delaz Fleet was one such remnant group and during its exile, it developed the Dra-C in an attempt to bolster its depleted fighting strength. Besides the regular Dra-C, the Delaz Fleet also built a version known as the Dra-C Custom with different shoulder thrusters, and retention of the right MS forearm. Years later, the Axis forces created a heavy equipment form of the Dra-C Custom for deployment alongside the MS-14J ReGelgu. 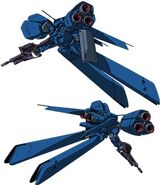 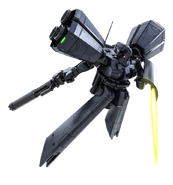 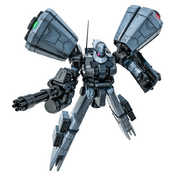