The MS-21C Dra-C is a mass-produced mobile suit first featured in Mobile Suit Gundam 0083: Stardust Memory OVA. It reappeared in the Mobile Suit Zeta Gundam: A New Translation III - Love Is the Pulse of the Stars movie in a gray color scheme used by Axis Zeon, and then in Mobile Suit Gundam Unicorn, where it is colored purple and used by Neo Zeon remnants.

A high-speed assault space mobile suit developed by the Zeon remnants known as the Delaz Fleet to augment their combat strength, it is often utilized for patrolling, reconnaissance and sabotage missions. Reflecting the fleet's lack of resources, the Dra-C is assembled primarily using the body parts of the MS-06F2 Zaku II F2 Type and parts from the space use fighter-bomber, Gattle. These parts are from damaged machines as well as dead stocks. Its head is based on the Zaku II F2 Type, but has a wider movement range for the monoeye to adapt to super high-speed combat.

The machine's straight line acceleration capabilities are extremely high and possesses significantly better mobility than space-use fighter crafts. However, when compared to a standard mobile suit, it has poor mobility due to its inferior AMBAC capabilities. This is a result of it having two propellant tanks instead of legs, even though these tanks can serve as AMBAC units. The tanks are modified Gattle parts and have thrusters at the bottom to ensure certain degree of maneuverability and turning capabilities. The Dra-C's backpack is a modified form of Gattle's main engine units, some parts are removed and new stabilizers added to the sides. Additionally, the fixed vernier thruster nozzles are replaced by larger, movable verniers. To compensate for the mobile suit's poor mobility due to a lack of legs, versatile thruster pods originating from work-use space ships are mounted on the shoulders.

On the flip side, the removal of legs is not without its benefits. In a mobile suit, the leg parts have the highest failure rate as well as use the most consumables. Thus, the Dra-C's legless design did confer it extremely excellent maintainability and operational costs. The Dra-C is lightly armed with a 40mm vulcan gun mounted in place of the right forearm and a shield with beam saber mounted on the left forearm. In late U.C.0090s, the Dra-Cs deployed by the Neo Zeon remnants, the Sleeves, are equipped with a gatling gun in place of the vulcan gun. This new weapon also provides better sensors, enhancing the mobile suit's sensor range.

Made from battleship plating, the Dra-C's shield has a beam saber for close combat. The shield also incorporates a small generator, an e-cap system and a cooling unit since the suit's own generator is insufficient for powering beam weaponry.

The beam saber emits high-energy Minovsky particles to form a blade-shaped I-field (via manipulation of electromagnetic fields), and then fills this I-field shell with superheated Minovsky particle plasma to produce an effective cutting blade. Dra-C is equipped with a beam saber with its hilt fixed at the underside of its shield.

Dra-C's right forearm is replaced by a 3-barrel 40mm vulcan cannon, which is unique to the Dra-C as vulcans aren't usually installed in the form of wielded guns. Its low caliber isn't powerful enough in dealing sufficient damage to mobile suits, but it can damage a mobile suit's sensors, or lightly-armored targets.

The Dra-Cs deployed by the Neo Zeon remnants, the Sleeves, in late U.C.0090s are equipped with a more powerful gatling gun in place of the 40mm vulcan gun. The sensor system of this weapon incorporates technologies developed at Axis and when linked to the Dra-C's system can greatly enhance the mobile suit's sensor range. As a result, it is best suited for patrolling and reconnaissance missions.

After the end of the One Year War, many of the Zeon remnants retreated from the Earth Sphere and went into hiding. The Delaz Fleet was one such remnant group and during its exile, it developed the Dra-C in an attempt to bolster its depleted fighting strength. The Dra-Cs were one of the many mobile suits deployed by the Delaz Fleet during Operation Stardust in U.C.0083.

Some Dra-Cs were recovered by the Axis Fleet when the Delaz Fleet was defeated by the Earth Federation Forces at the end of the operation. The Axis Fleet subsequently deployed the Dra-Cs, now recolored in a grey color scheme, during the Gryps Conflict in late U.C.0080s.

In U.C. 0096, several Dra-Cs were deployed by the "Sleeves" to defend the Palau asteroid from the attacking Earth Federation forces. These Dra-Cs were repainted in a new color scheme, given the distinctive markings featured on many of the Sleeves' mobile suits, as well as a more powerful gatling gun. However, these outdated machines were no match for the more modern mobile suits of the Earth Federation. 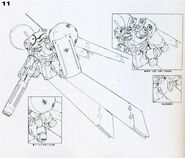 A pair of Axis Zeon's Dra-Cs (gray color) as featured in the Mobile Suit Zeta Gundam: A New Translation III - Love Is the Pulse of the Stars 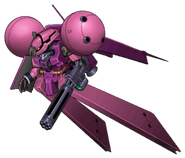 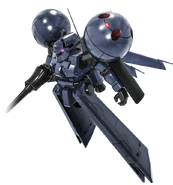 Retrieved from "https://gundam.fandom.com/wiki/MS-21C_Dra-C?oldid=456694"
Community content is available under CC-BY-SA unless otherwise noted.