A prototype mobile suit of the Principality of Zeon. It is one of the mobile suits developed for decisive battles at the end of the One Year War. This machine was developed in secret at an arsenal in A Baoa Qu, and is said to be a machine that boasts a high level of perfection. It used a high-powered reactor to power the large number of thrusters and verniers that gave the machine a great amount of mobility. It also has many built-in armaments, but information about it is scarce, and it is said to be a phantom mobile suit.

A pair of beam firearms mounted on both forearms. The part that is firing is a beam saber that also serves as a beam gun.

Two of these are mounted on each shoulder.

Two of these are built into the lower chest.

Spikes on both shoulders that are heated to increase attack power.

Short beam sabers built into the toes of both feet. The blade is not always activated, but is formed with each kick attack.

The Dolmel was first deployed in December of UC 0079, and saw service in the Battles of Solomon and A Baoa Qu. One was piloted by ace pilot Ramuiko Stein, who fought against the RX-78-2 Gundam, piloted by Amuro Ray. The Dolmel was eventually destroyed and Stein killed because of Amuro's superior Newtype skills.

In the manga "Mobile Suit Gundam Katana", a blue colored machine is used by the anti-Earth Federation organization True Federal. It is piloted by Richard Grayson, who plays the role of the organization's leader, Lord Sparda. 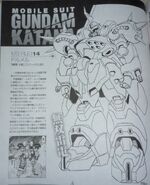