The MS-18E Kämpfer (ケンプファー, Kenpufā?) is a heavy assault mobile suit featured in the Mobile Suit Gundam 0080: War in the Pocket OVA. It was piloted by Mikhail Kaminsky of Zeon's Cyclops Team during the One Year War.

The "E" in the MS-18E Kämpfer's model number was an abbreviation for the German word "einhauen," which translates to "one strike." "One strike" summed up the suit's role as a fast assault unit that was meant to strike quickly, cause massive damage with its varied weapons loadout, and make a fast escape. The Kämpfer was a very focused design, never intended to work outside of its role. Within this role it was an exceptional unit, rivaling the Federation's RX series in firepower and speed. It was equipped with numerous thrusters and verniers to achieve high maneuverability. Conversely, the large number of thrusters resulted in higher fuel consumption rate, limiting its operational time.

Kämpfer's design opted for minimal armor, even removing the hip mounted skirt armor found on most mobile suits. The choice of conventional shell-based weapons in favor of beam weapons was made to reduce the drain on its powerplant and resultant drop in speed. Weapon racks were designed to be ejected from the unit as they were expended, minimizing dead weight. The Kämpfer was intended to be operated by special forces, and was built to be easily disassembled and reassembled in blocks, aiding in its infiltration behind enemy lines.

An uncommon feature on Zeon MS, the Kämpfer has two Vulcan Guns in the head similar to Federation's mobile suits. These shell firing weapons have high rate of fire but little power, and can't damage the thick armor of a mobile suit, though it can damage lightly armored areas such as the sensors. They are ideal for shooting down small, lightly armored targets such as missiles, attack vehicles, etc.

The beam saber is a small device held in the mobile suit's hands when deployed and is powered by a rechargeable energy capacitor. It emits high-energy Minovsky particles to form a blade-shaped I-field (via manipulation of electromagnetic fields), and then fills this I-field shell with superheated Minovsky particle plasma to produce an effective cutting blade. This equipment was developed from the engagement data with RX-78-2 Gundam. The Kämpfer has two beam sabers, one stored in each thigh.

Specifically designed for assault-type MS, this weapon is of the same type as the one used by the MS-08TX Efreet. It has a 9-round capacity with known ammunition including slugshot, luna titanium 00 buckshot, and MS-use birdshot (BB shot). It can be loaded via pump-action, or automatically by an electric mechanism. The Kämpfer is capable of carrying two of these shotguns, one stored on the rear waist armor, while the other is carried in the hands.

A redesigned version of Dom series' 360mm Giant Bazooka, with improved shape charges and firepower. Fed by a 5-round magazine, it is effective in both anti-ship and anti-MS combat, with a single round blowing off a MS' torso easily. The Kämpfer can be equipped with two Bazookas, and they are stored on its back when not in use.

A simplified, disposable rocket launcher. It is commonly used by Zeon mobile suits in the late stages of the One Year War. As the warhead is not equipped with a guidance device, it is extremely hard to use the Sturm Faust to hit a moving target accurately. However, it is still a highly destructive portable weapon. Two Sturm Fausts could be stored on hardpoints on the legs of the Kämpfer.

A experimental beam weapon developed at Axis after the One Year War, its effective firing range is 1.8 times that of an ordinary beam rifle. As it's powered by its own built-in generator, it can be wielded by Zaku type MS. The generator however only has enough power for five shots. The firearm appears in Mobile Suit Gundam: Char's Deleted Affair: Portrait Of Young Comet.

The Chain Mine was a number of disc-shaped mines connected to each other by flexible cable. Each mine had magnetic claws on its underside, allowing it to be attached to objects. The Chain Mine could be thrown out like grenades one by one, laid on the ground or fixed to a building as a mine, or (most destructively) attached to a single enemy and detonated - this attack method was used by Kämpfer against the prototype Gundam NT-1. It failed to destroy the NT-1, but it inflicted heavy damage to NT-1's Chobam Armor. The Chain Mine was used even in U.C. 0096 as the weapon of Neo Zeon's AMX-101E Schuzrum-Galluss. A similar but larger version of the Chain Mine was featured on Earth Federation's RX-78GP03 Gundam "Dendrobium" as the Demolition Chain.

Mounted on several points on the Kämpfer are weapon racks which are used to mount various weapons when not in use, and can be ejected when expended.

Original equipment set in SD Gundam BB Senshi. It is designed for fighting against the RX-78NT-1FA Full Armor Gundam "Alex", and is in the form of a single armor covering the head and chest.

In the few remaining days and weeks before the end of the One Year War, the Principality of Zeon churned out several new prototype mobile suits. One of these new units was known only as the YMS-18 Kämpfer Prototype, which Zeon engineers quickly began producing different variations and redesigns to create custom units meant to excel in specific mission roles. One of the variations created was the MS-18E Kämpfer.

Despite the drawbacks of limited armor and high fuel-consumption, the Kämpfer was still an incredible mobile suit. Due to its late introduction to the war, only a few units were ever produced. A single Kämpfer was fielded by Zeon's Cyclops Team during their infiltration of the Libot Colony in the neutral Riah Republic of Side 6 on the 20th of December, Universal Century 0079. This unit, piloted by an inebriated Mikhail Kaminsky, destroyed the entire Scarlet Team mobile suit squadron of the assault carrier Gray Phantom single handedly. It then faced its primary objective, the Earth Federation's RX-78NT-1 Gundam "Alex". Despite completely destroying the NT-1 Alex's chobam armor and damaging the Gundam, the Kämpfer failed to disable it and fell prey to the Gundam's forearm-mounted 90mm gatling gun.

In Gundam Legacy, a single Kämpfer served as the control unit for the "Silver Lance" weapon system for the Operation Silver Lance plot against the Republic of Zeon in U.C. 0084. It was piloted by Zeon Remnant's Lilia Flaubert. 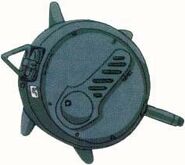 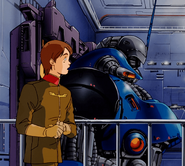 Being disassembled (side view)

Close-up of a Chain Mine unit

Participating in Operation Silver Lance as seen on Gundam Legacy

As seen on Mobile Suit Gundam Extreme Vs. Maxi Boost ON game 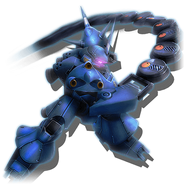 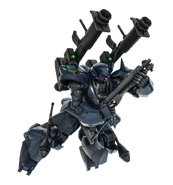 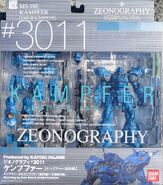 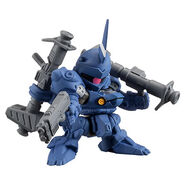 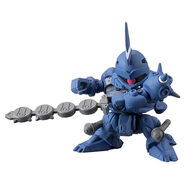 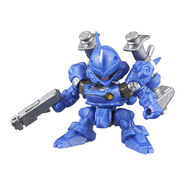 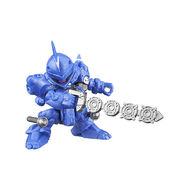 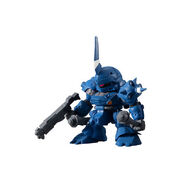 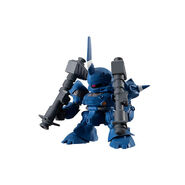 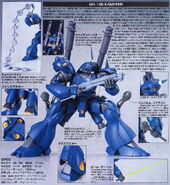