The MS-15PLUS Gyan EX is a mobile suit that appeared in the Jupiter (Zeus) in Operation Titan U.C. 0083 manga.

An improvement over the original YMS-15 Gyan, the Gyan EX features enhancements in communication capabilities and its generator that allow operation in the Jupiter sphere. It also lacks the Gyan's trademark Beam Saber.

The beam rifle, as its name suggests, is a high-powered energy beam weapon that fires condensed mega particles which can penetrate almost any armor that has not been treated with specific counter-measures.

The Gyan EX is equipped with a large circular shield that not only defend it from beam weapons, but also has offensive capabilities in the form of missiles and hide bombs stored within.

The shield of the Gyan EX stores many small missiles. Though individually not very powerful these missiles are deadly when fired in massed volleys. Additionally these were not meant for long range combat, instead serving more as a mid to close range ranged weapon.

A type of space mine (space version of the naval mine). The hide bombs freely floats around in space once deployed, damaging any Mobile Suit that come near them

The Gyan EX was used by Char Aznable in U.C. 0083 to defend a Zeon resource base from an attack by the Earth Federation Forces. 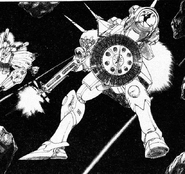 Retrieved from "https://gundam.fandom.com/wiki/MS-15PLUS_Gyan_EX?oldid=440611"
Community content is available under CC-BY-SA unless otherwise noted.