The MS-15K Gyan Kai (aka Gyan Custom) is a mobile suit from the Universal Century timeline and was first featured in the video game SD Gundam G Generation.

A variant of the Principality of Zeon's YMS-15 Gyan, the Gyan Kai was developed and tested at Axis after the One Year War. Based off Zimmad's plan for an enhanced version of the phantom MS-15Kg Gyan Krieger, the Gyan Kai has high maneuverability and specializes in close combat, using a large beam sword as its primary weapon and has a shield packed full of needle missiles.

Although the Gyan Kai's overall performance is superior to the AMX-107 Bawoo, which was developed simultaneously, its lack of versatility caused it to be passed over for mass production. It was often treated as the ancestor of the Neo Zeon's knight (high-ranking officer)-use MS, and was also known as Proto-R-Jarja due to its look. However, in truth, its concept and armament seem to be inherited by AMX-117L Gaz-L and AMX-117R Gaz-R.

A lance-like physical sword, a beam blade is generated along the sword's edge when the side guards flip out.

A shield based on the original Gyan's Shield. It is loaded with Needle Missiles but lacks the original's hide bombs.

The shield stores many small missiles. Due to their small size, the needle missiles are not very powerful and are mainly used to restrain enemy's movement or for intimidation purposes. These missiles can however still be quite deadly when fired in massed volleys. 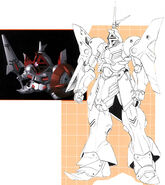 Retrieved from "https://gundam.fandom.com/wiki/MS-15K_Gyan_Kai?oldid=451944"
Community content is available under CC-BY-SA unless otherwise noted.