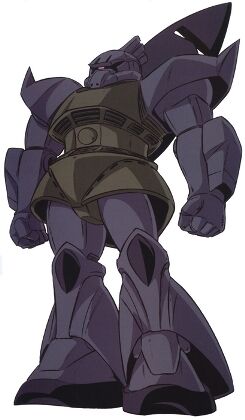 The MS-14 Gelgoog was a series of mobile suits produced by the Zeonic company for the Principality of Zeon army during the final days of the One Year War and was the first Zeon mass produced mobile suit to carry beam weaponry.

The suit was initially known as the MS-11 Gelgoog but the model number was eventually reassigned to the MS-11 Act Zaku. The Gelgoog was designed as a high performance mobile suit equipped with beam weapons to counter the Earth Federation's RX-78-2 Gundam.

As with the Zaku line of mobile suits, many variants of the Gelgoog were produced for different mission roles, such as artillery support, desert combat and sniping. During the One Year War, the Gelgoog was initially tested by ace pilot Char Aznable, who piloted his own MS-14S Gelgoog Commander Type for a short period of time. After further battles by Char and test piloting by Chimera Corps aces Johnny Ridden and Thomas Kurtz, the Gelgoog was put into mass production as the MS-14A Gelgoog.

However, despite being superior to any machine fielded by the Federation, with the exception of the Gundam variants, when the unit was deployed at the Battle of A Baoa Qu most of these powerful machines were piloted by fresh and inexperienced recruits who were no match for the Federation's by then battle-hardened mobile suit pilots.

After the war, many Gelgoogs were either salvaged by Zeon remnants, captured by the Federation, or put on the market for civilian use. Between the years of U.C. 0088 and U.C. 0120 at least two Zeon remnant groups would take the Gelgoog's design and upgrade the mobile suit with modern technology of the time.