The MS-14S (YMS-14) Gelgoog Commander Type is a commander mobile suit that entered production as the MS-14A Gelgoog.

Featuring a high-powered generator, various thrusters to aid mobility, a large pointed oval-shaped shield, a Beam Rifle, and a Beam Naginata, the MS-14S Gelgoog Commander Type rivals the capabilities of the Earth Federation's RX-78-2 Gundam. In fact, compared to the Gundam, the Gelgoog Commander Type is slightly faster, more mobile and possesses a more powerful generator and beam weapon selection; this was proven by Char during his first sortie in his personal unit against Amuro Ray's Gundam during the One Year War. On the other hand, it has thinner and less durable armor than the Gundam (which is built with Luna Titanium Alloy), and the lack of built-in weapons makes the Gelgoog easier to disarm (which Amuro literally did) and leave weaponless.

The Gelgoog Commander Type is equipped with a twin beam sword, sometimes referred to as a "Beam Naginata". Its handle is about the length of two beam saber hilts and has a beam emitter at both ends, allowing it to generate two beam blades by containing and shaping plasma via an I-Field. The weapon can cut through most armor not treated with anti-beam coating. It can also generate only a beam blade on one end. When not in use, it is stored on the back.

The shield is a thick sheet of armor designed to take severe punishment that would normally destroy a mobile suit, and has an anti-beam coating to protect against beam attacks. Typically physical shields can only take so much damage before they succumb to the pressure and break. The Gelgoog's shield is arm-mounted and can be stored on the back when not in use.

Mounted on the right forearm, this modification originated from the Gelgoog Marine. This projectile firing weapon is highly effective against most mobile suit armor at close range.

A powerful thruster pack, that greatly increases the Gelgoog Commander Type's speed and mobility. This was removed from a MS-14B Gelgoog High Mobility Type, and installed on Char Aznable's Gelgoog.

The Gelgoog was Zeonic's entry for Zeon's next flagship mobile suit and rival to Zimmad's YMS-15 Gyan. After it was adopted as the new mainstay mobile suit, 25 units, under the designation YMS-14S (the 'Y' in YMS-14S means it is a prototype Mobile Suit) were produced initially; 24 of the machines were given to the Chimera Corps, aka the Ace Pilot Corps. The remaining unit was assigned to Char Aznable, who piloted it against the RX-78-2 Gundam in two sorties. Later on in the war, the designation "Y" in YMS-14S was removed, renaming it MS-14S Gelgoog Commander Type. Originally a prototype, it was later converted into a high performance unit for commanders.

Proving to be an excellent design, the Zeon forces only made slight changes based on feedback from the test pilots. A significant change was adding more armor to make it more durable, but cutting down some of the Gelgoog's speed. Once finalized, they decided to put it under mass production to counter the Earth Federation's mass-produced RGM-79s, which were slowly but steadily pushing deeper into the Principality of Zeon's territories. The mass-produced version was then designated MS-14A Gelgoog.

After Char's unit was damaged and defeated in combat by Amuro Ray and his RX-78-2 Gundam, his Gelgoog Commander Type was later repaired and modified to improve its performance, adding a new and more powerful backpack taken from the MS-14B Gelgoog High Mobility Type as well as replacing the severed arm with an arm from the MS-14F Gelgoog Marine. It is then held in reserve while Char pilots the MSN-02 Zeong. After the end of the battle of A Baoa Qu, Char flees using his Gelgoog to support the Zeon retreat to Axis. While at Axis, Char's Gelgoog is further refined, removing the B-type backpack, adding a more streamlined design, larger thrusters, a vulcan gun and a hidden beam saber, earning the unit the new designation of MS-14U Gelgoog (Outer Space Type). 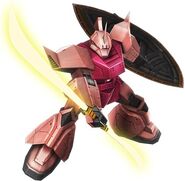 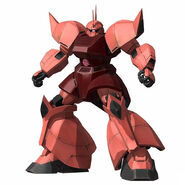 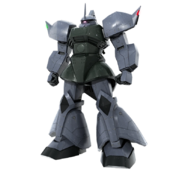 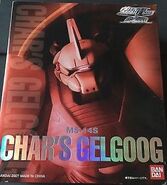 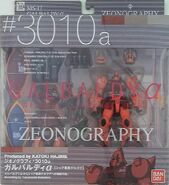 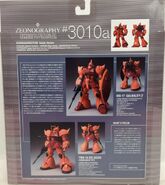 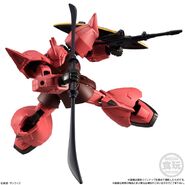 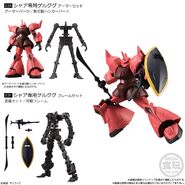