The MS-14Jg Gelgoog Jäger (ゲルググJ（イェーガー）, aka Gelgoog J) is a variant of the MS-14A Gelgoog and appeared in the Mobile Suit Gundam 0080: War in the Pocket series.

The Gelgoog Jäger is a product of Zeon's United Maintenance Plan. It is an upgraded, high-performance version of the already exceptional MS-14A Gelgoog, with its improved generator enabling it to carry heavier beam weapons. Its fire control system is equipped with the latest hardware and software, allowing it to be used for precision shooting missions. Its backpack is equipped with a laser communication unit and antenna, and a blade antenna on the head is also standard equipment. The Gelgoog Jäger is also faster and more maneuverable than the standard Gelgoog, and can be equipped with external propellant tanks to greatly extend its operating range. When armed with its powerful and highly accurate beam machine gun, it becomes a very effective sniper.

The Gelgoog Jäger is equipped with two beam spot guns, one mounted on each forearm. A close range weapon still in development, it fires volleys of beams for defensive purposes, but can also deal lethal damage at near point blank range.

A weapon that is more powerful than a regular beam rifle. It is possible to fire a pulsed beam, and destructive power is prioritized over the penetration force. In the case of a single shot, the target can be destroyed with high accuracy because the kinetic energy of the beam is less likely to decay. The sights are also exceptional. When not in use, it is stored on the rear waist armor.

The beam saber is a small device held in the mobile suit's hands when deployed and is powered by a rechargeable energy capacitor. It emits high-energy Minovsky particles to form a blade-shaped I-field (via manipulation of electromagnetic fields), and then fills this I-field shell with superheated Minovsky particle plasma to produce an effective cutting blade. The Gelgoog Jäger has one beam saber stored in an unknown location.

An optional shield used by the Gelgoog Jäger, it is the same shield as used by the MS-14Fs Gelgoog Marine Commander Type.

Developed at the very end of the One Year War, the Gelgoog Jäger was produced only in very limited numbers. It was known to be used during Zeon's attacks on the Side 6 colony of Libot.

Preparing for launch from Graf Zeppelin cruiser (from Gundam 0080 OVA)

Deployed by the Colaiton of Volunteers 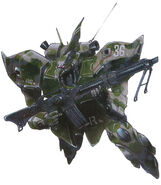 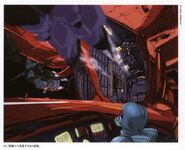 As featured in "MS Era" pictorial

As featured in Mobile Suit Gundam: Bonds of the Battlefield arcade game 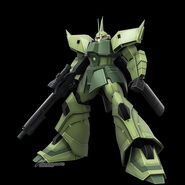 Gelgood Jaeger (Standard colors) as featured in Bonds of Battlefield 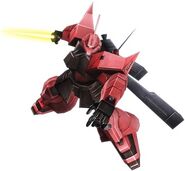 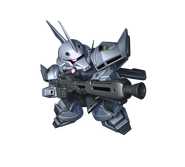 As seen in Super Gundam Royale 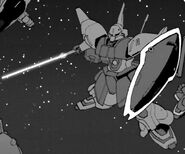