Compared to the mass production variant, the Gelgoog Marine Commander Type boasted improved mobility and maneuverability,[1] featuring more vernier thrusters and two additional propellant tank slots for a total of four.[2] In addition to the head antenna signifying its role as a commander unit, it was also equipped with a pair of head-mounted 40mm Vulcan Guns.[3] Furthermore, the mobile suit has undergone weight reduction and is lighter than the standard Gelgoog Marine.[3]

The Gelgoog Marine Commander Type's main weapon was the MRB-110 Beam Rifle, which was capable of rapid firing due to a forced cooling mechanism. It was equipped with a custom arm-mounted shield, which conceals a chaff/flare dispenser. Its other weapons are identical to the standard Gelgoog Marine.[3] Late in the One Year War, the unit used by Cima Garahau was given a unique camouflage pattern composed of many fine dots, which makes gauging their shape on a monitor difficult. The paint itself also confuses many different types of sensors.[4]

A 110mm machine cannon is mounted on each forearm, for a total of two cannons. These projectile firing weapons are highly effective against most mobile suit armor at close range.

Unlike most Gelgoogs made during the One Year War, the MS-14Fs is not equipped with a beam naginata for close combat, it instead stores two regular beam sabers in the sides of the waist.

Developed concurrently with the beam rifle used by the MS-14Jg Gelgoog Jäger, the MRB-110 featured a drum magazine-type energy pack. It was capable of rapid firing due to a forced cooling mechanism, and was also known as a beam machine gun.[3]

A large forearm-mounted shield with a viewing window. It has a built-in chaff flare dispenser for distraction.

Developed by MS firearm manufacturer MMP near the end of the One Year War at Zeon's Granada base, this experimental rail rifle utilizes electromagnetic force to launch high velocity luna titanium bullets to inflict heavy damage. This handheld weapon only appears in the manga "Mobile Suit Gundam 0083 Rebellion".

An external tank used for propellant storage. This extra propellant greatly extends a mobile suit's operating range and enables it to stay in combat longer. When the propellant is consumed, the tank can be discarded to reduce the mobile suit's weight. These tanks use a two-layered construction, with one layer containing propellant, and the other holding extra coolant.

On December 31st, following the Battle of A Baoa Qu, Cima Garahau led MAU Cima on a fighting retreat through the E Field in her camouflage-patterned Gelgoog Marine Commander Type. She was joined by Geil Hunt and his MAU Geil. The Gelgoog Marine Commander Type was heavily damaged during the retreat, losing its left arm and right leg, though Cima was able to survive and lead her forces to Karama Point.[5]

However, at Karama Point, the commander of MAU Cima, Asakura, demanded Cima to hand over the Lili Marlene to the Earth Federation Forces as compensation. Angered, Cima deployed in a Gelgoog Marine Commander Type and attempted to kill him, but was stopped by Anavel Gato in the YMS-09R-2 Prototype Rick-Dom Zwei. It is unknown whether this unit was a different one or the original Gelgoog Marine Commander Type repaired, though Cima would continue to pilot this unit in U.C. 0083.[5]

During Operation Stardust in U.C. 0083, Cima used her Gelgoog Marine Commander Type before switching to the AGX-04 Gerbera Tetra. In the manga "Mobile Suit Gundam 0083 Rebellion," it is given to Clara Lodge when Cima switches to the Gerbera Tetra. 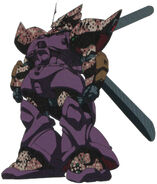 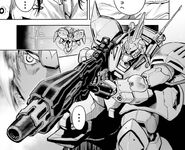 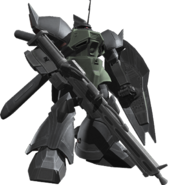 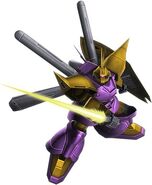 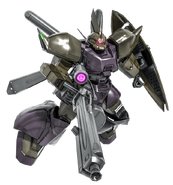 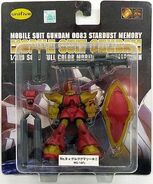 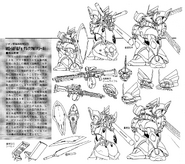 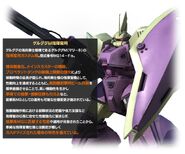