The Gelgoog Marine is a variant of Zeon's final mass-produced mobile suit. It was developed exclusively for Zeon's marine corps, who carried out a variety of special missions during the One Year War. With its stronger armor, improved vernier thrusters, and external propellant tanks, the F type boasts performance far surpassing that of the standard Gelgoog.

A weapon from the MS-09R-2 Rick Dom II. The bazooka is magazine-fed and holds 5 rounds per mag. A single round can blow the torso off of an enemy mobile suit. 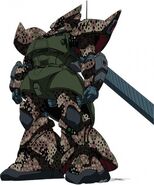 1/144 Gelgoog Marine (Zeon Remnant Version) from Advance of Zeta: The Flag of Titans: modelling with HGUC "MS-14F Gelgoog Marine"
Add a photo to this gallery

Retrieved from "https://gundam.fandom.com/wiki/MS-14F_Gelgoog_Marine?oldid=333090"
Community content is available under CC-BY-SA unless otherwise noted.