The MS-14D Desert Gelgoog is a variant of the MS-14A Gelgoog. It first appeared in Gundam ZZ Mobile Suit Variations and was later animated in the OVA Mobile Suit Gundam Unicorn.

A modified version of the Gelgoog for local warfare. It was designed for operation in the desert, with dustproofing measures applied to various parts, and to deal with heat problems, the cooling system was strengthened, and the built-in power pipes were exposed to the outside, to thoroughly dissipate heat and cool the machine, making it possible to withstand long hours of operation in the desert.

To ensure mobility under gravity, thrusters were added to the legs and a backpack was also installed. The arm-mounted jet propulsion systems, which are redundant for sub-gravity combat, have been removed, and the left forearm is equipped with the distinctive Armed Buster, a collapsible projectile weapon. Additionally, the backpack is equipped with a scope for observing the surroundings from within the trenches or in the sand, making it an machine that excels in guerrilla warfare and covert operations.

The twin beam sword, also known as a beam naginata, is the Desert Gelgoog's close-range weapon. Its handle is about the length of two beam saber hilts, and has an emitter at both ends, allowing a single weapon to create two beam blades. It can also generate only a beam blade on one end. When not in use, it is stored on the rear waist armor.

The first portable beam weapon to be successfully mass-produced by the Zeon Army. It was developed by incorporating the Federation's technical data on energy CAP technology that Zeon obtained via Side 6. Its performance is comparable to that of the RX-78-2 Gundam's beam rifle, and boasts a high targeting value thanks to its high-performance sensor.

A projectile-firing cannon attached to the left forearm, its barrel folds 180 degrees back when not in use.

A rocket booster for auxiliary propulsion attached to each side of the backpack, and is used for high-altitude jumps under gravity. This is the same equipment as used by the MS-06F2 Zaku II F2 Type.

During the One Year War, a very small number of machines were used on the African front. In U.C. 0096, a Desert Gelgoog was deployed by Zeon Remnants for the assault on the Federation's Torrington Base and was destroyed by the RX-160S Byarlant Custom. 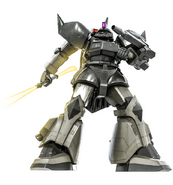