The MS-14C Gelgoog Cannon (ゲルググキャノン, Gerugugukyanon) is a mass-produced artillery mobile suit. It is a variant of the original MS-14A Gelgoog. It is featured in the original design series Mobile Suit Variations (MSV).

When the plans for the new MS-14 (formerly MS-11) Gelgoog were completed, twenty-five prototypes, under the designation YMS-14S (the Y in YMS-14S means it is a prototype Mobile Suit) were produced; twenty-four of the machines were given to the Chimera Corps. Of these twenty-four units, nine were configured into the MS-14B Gelgoog High Mobility Type while the rest were outfitted as Gelgoog Cannons. One of them was the signature unit of Chimera Corps pilot Thomas Kurtz, with his custom tan/army green color scheme. The Gelgoog Cannon is equipped with a specialized head unit and mounts a powerful beam cannon on a modified B-type backpack, and even with it, the suit's reactor is still powerful enough to support other weapons systems. This meant the Gelgoog Cannon could carry beam rifles and bazookas, or even swap out the forearm jet engines to mount other optional equipment. As the Gelgoog Cannon made use of the B-type's powerful backpack, it had enough thrust to keep itself maneuverable despite the added weaponry weight. The suit soon proved itself a capable fire-support and anti-fleet unit.

A backpack mounted beam cannon that is positioned over the right shoulder, it is powered by the suit's generator and used for long range attacks.

The twin beam sword, also known as a beam naginata, is the Gelgoog's weapon in close-range melee combat. Its handle is about the length of two beam saber hilts and has a beam emitter at both ends, allowing it to generate two beam blades by containing and shaping plasma via an I-Field. The weapon can cut through most armor not treated with anti-beam coating. It can also generate only a beam blade on one end. When not in use, it is stored in the rear waist armor.

The same Giant Bazooka used by the Dom series of mobile suits. The bazooka is magazine fed and holds 10 rounds per magazine, and a single round can blow the torso off of an enemy mobile suit.

An optional 3-tube missile launcher that can be attached to the forearm of the Gelgoog instead of the usual jet engines.

A small optional shield that can be attached to the forearm of the Gelgoog instead of the usual jet engines.

The same shield used by the standard Gelgoog. A thick sheet of armor designed to take severe punishment that would normally destroy a mobile suit, and has an anti-beam coating to protect against beam attacks. Typically, physical shields can only take so much damage before they succumb to the pressure and break.

The Gelgoog Cannon proved its usefulness as both a fire support and anti-fleet unit. Only fifteen of these suits were ever built, twelve of these were used in 'Operation Clarion', a pre-emptive strike against Earth Federation Forces' Tianem Fleet rallying point. With only the loss of two suits, and damage to three others they managed to significantly damage the staged fleet, enough to delay the final stages of the One Year War by another week. The Zeon Military, impressed by the Gelgoog Cannon's performance, manufactured enough parts to assemble another 122 units. By this time it was too late and the One Year War came to an end, the suit was to suffer the same fate as its brethren as being too little, far too late.

Gelgoog Cannon as featured in Mobile Suit Gundam: Bonds of the Battlefield 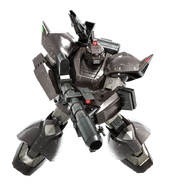 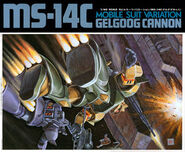 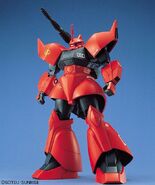 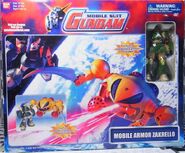 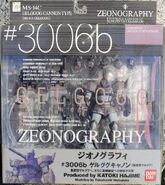 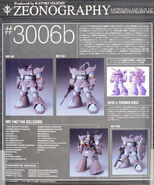 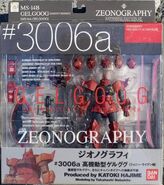 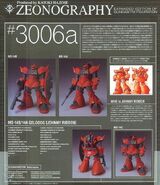