MS-14C-1A Gelgoog Cannon (ゲルググキャノン, Gerugugukyanon) is a mass-production assault mobile suit and variant of the original MS-14A Gelgoog. It first appeared as a part of the original design series MSV-R: The Return of Johnny Ridden and the unit is piloted by Jacobius Node.

The MS-14C-1A Gelgoog Cannon was essentially a Gelgoog High Mobility Type equipped with more powerful thruster packs, greatly increasing its speed and mobility. It also has conformal tanks on its legs to extend its operating time. A high mobility backpack similar to that of the B type was prepared as optional equipment, and it can switch between this backpack and a standard cannon pack depending on the mission. The Gelgoog Cannon was equipped with a twin beam sword, a beam rifle, and a bazooka.

A backpack mounted beam cannon that is positioned over the right shoulder, it is powered by the suit's generator and used for long range attacks.

The same Giant Bazooka used by the Dom series of mobile suits. The bazooka is magazine fed and holds 10 rounds per magazine, and a single round can blow the torso off of an enemy mobile suit. It can be mounted on the unit's backpack and fired directly.

An optional 3-tube missile launcher that can be attached to the forearm of the Gelgoog instead of the usual jet engines.

A small optional shield that can be attached to the forearm of the Gelgoog instead of the usual jet engines.

A beam weapon originally used by the RGM-79［G］ GM Sniper during the One Year War, it mounts a high-powered scope, allowing the pilot to hit distant targets with pinpoint accuracy. When engaging with Uma Lightning in Jaburo, this weapon is used by Jacobius Node's customized unit, accompanied by a RMS-106 Hizack carrying a generator.

A standard defensive armament to protect against physical attacks and has anti-beam coating on its surface for defending against beam attacks. Equipped on Ghanim Mouffetard's customized Gelgoog unit is a huge shield featuring the Chimera Corps emblem.

For targeting, Jacobius Node's customized unit equips the same special visor used by the MS-06E-3 Zaku Flipper, which can be forcibly removed by an explosion bolt.

In 0079 U.C, the Gelgoog Cannon was assigned to the elite Chimera Corps and participated in the Battle of A Baoa Qu at the end of the war. The stripes on its left side are for recognition purposes, and apparently there are also B types with matching patterns. One particular unit is piloted by Jacobius Node who preferred long-range weaponry in order to eliminate his enemies. 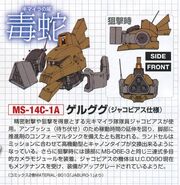