This Gelgoog is the exclusive machine of Lieutenant Uma Lightning, who is also known as the "Blue Lightning" and was one of the ace pilots belonging to the Principality of Zeon's Mobile Attack Force's specially organized battalion, the "Chimera Corps". It is painted in blue and white, and because of these colors, it was sometimes mistaken for the machine of Colonel Robert Gilliam, whose personal colors are blue and cream yellow. The Gelgoog Uma Lightning Custom's head unit is different from the regular Gelgoog, and its high-mobility backpack has also been improved. It also incorporated parts left over from the prototype MS-11 Act Zaku before the designation of the Gelgoog project was changed to "MS-14". Similar to the MS-14C-1A Gelgoog Cannon, it had conformal tanks on its legs to extend its operating time.

After the One Year War, Uma had Anaheim Electronics upgrade his Gelgoog using Federation materials and technology so that it could compete with newer mobile suits. Also, by using parts from Anaheim, it is able to operate weapons made by the Federation. When Rimia Greenwood, an MS engineer of the F.S.S. research team, analyzed the data and performance of this machine in U.C. 0090, she found that in addition to using "Gundarium Alloy" for its armor material and "Crushable Structure" for its armor structure, it was also equipped with "Field Motors" with the latest "Magnet Coating". Furthermore, the verniers were upgraded for increased output using fuel made by the Federation. Additionally, a spectrum analysis also revealed that the Gelgoog's targeting lasers match those made with Federation technology.

The first portable beam weapon to be successfully mass-produced by the Zeon Army. It was developed by incorporating the Federation's technical data on energy CAP technology that Zeon obtained via Side 6. It has performance no less than that of the RX-78-2 Gundam's beam rifle, and boasts a high targeting value thanks to its high-performance sensor.

An optional armament that can be mounted on the forearms. This is same weapon as used by the MS-06D Zaku Desert Type.

A weapon created from the demands of Zeon ace pilots to be equipped with a simple, easy-to-use projectile firing weapon on their mobile suits. The 4-tube missile launcher can be easily assembled inside Chimera Corp's warship and ready for deployment in a short period of time.

An oval-shaped piece of defensive equipment. It has a beam-resistant coating, and can withstand beam attacks to some extent. When not in use, it can be mounted on the back.

Mounted on the forearm, this small, light shield is commonly used by the Gundam Ground Type and GM Ground Type. Constructed of Luna Titanium alloy, and is designed to primarily protect the cockpit and other critical areas. Additionally, it can be used as a close range striking weapon in mobile suit combat. Furthermore, through lodging the spikes at the tip into the ground, the shield can serve as a free standing frontal defense. This also allows the mobile suit to use both hands to hold large caliber weaponry and maintain a stable firing position.

A long, high output beam rifle, it can also generate a beam saber for melee combat. Has claws that can also be used as a rake. Output 6.6 MW.

After the end of the One Year War, Lieutenant Uma Lightning became part of the Federation Forces Technical Test Unit. With the rank of Captain, he served as the commander of the 202nd Technical Test Battalion. Although the details are unclear, it is said that he had been searching for the captain of the Chimera Corps' 1st Company, Major Johnny Ridden, also known as the "Crimson Lightning", who went missing at the end of the war. Uma continued to operate his custom Gelgoog even after the end of the war, and it eventually became a highly advanced hybrid machine with the addition of the latest Federation Forces technology to its body. Even though its interior has been changed, it is said that Uma insisted on keeping the machine's appearance unchanged so that Johnny Ridden would recognize him when they meet. 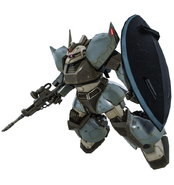