The MS-14BR Gelgoog High Mobility R Type was a Gelgoog High Mobility Type with improved speed and mobility. This was achieved through the installation of large thruster units in the legs, resulting in the removal of armor around the suit's calves. Due to its resemblance to the MS-06R series, it was informally known as the "Gelgoog R". Its operating time has been shortened in exchange for further improvement in maneuverability, but lack of propellant is not a problem as the mobile suit is for the ace pilots of the Chimera Corps.

The Gelgoog series is the first series of mass produced Principality of Zeon mobile suit to be equipped with a beam rifle. It was developed by incorporating the federation's technical data on energy CAP technology that Zeon obtained via Side 6. The Gelgoog R's beam rifle features a cooling jacket as well a grenade launcher for improved performance, and can be mounted on the unit's backpack and fired directly.

The shield is a thick sheet of armor designed to take severe punishment that would normally destroy a mobile suit, and has an anti-beam coating to protect against beam attacks. Typically physical shields can only take so much damage before they succumb to the pressure and break. Like the normal Gelgoog, the Gelgoog R carries an oval-shaped shield.

An optional 3-tube missile launcher that can be attached to the suit's forearm instead of the usual jet engines.

A weapon created from the demands of Zeon ace pilots to be equipped with a simple, easy-to-use projectile firing weapon on their mobile suits. The 4-tube missile launcher can be easily assembled inside Chimera Corp's warship and ready for deployment in a short period of time.

Two MS-14BR Gelgoog High Mobility R Type were remodeled in Zimmad's factories, and delivered to the elite Chimera Corps along with spare parts that were used to upgrade additional units. Maj. David Chaseman and 1st Lt. Emme Diplom of Chimera Corps used the suit during the Battle of A Baoa Qu at the end of the war. Another unit was piloted by Vincent Gleissner of Zeon's Marchosias MS regiment, who also used his unit in the battle of A Baoa Qu. In U.C.0096, a mercenary unit composed of Gelgoog-types was hired by Federation Forces captain Rock Hawker to attack the transport ship Aonbarr. 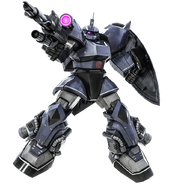 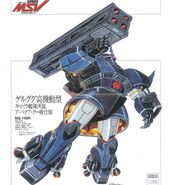