The MS-14A Gelgoog (ゲルググ,Gerugugu) was the last mass production mobile suit produced by the Principality of Zeon during the One Year War.

The MS-14A is the mass production version of the Gelgoog, it was equipped with a shield, a twin beam sword (also referred to as a "beam naginata") and a beam rifle, a first for a Zeon mobile suit. The Gelgoog was a superior mobile suit in every aspect to the MS-06F Zaku II and even the MS-09R Rick Dom.

The twin beam sword, also known as a beam naginata, is the MS-14A Gelgoog's main close combat weapon. Its handle is about the length of two beam saber hilts and has a beam emitter at both ends, allowing it to generate two beam blades by containing and shaping plasma via an I-Field. The weapon can cut through most armor not treated with anti-beam coating. It can also generate only a beam blade on one end. When not in use, it is stored on the back.

The MS-14A Gelgoog is the first mass produced Principality of Zeon mobile suit to be equipped with a beam rifle. It was developed by incorporating the Federation's technical data on Energy CAP technology that Zeon obtained via Side 6. Its power rivals the beam rifle used by the RX-78-2 Gundam.

One of the prototype beam rifles developed in parallel with the Gelgoog's beam rifle. To reduce the beam attenuation effect in the atmosphere, it is equipped with a built-in cooling system for the generation of a high output beam. However, its energy conversion efficiency is poor, requiring time to recharge. Since it was intended to be used on the ground, it is prone to overheating when used in space.

A large bazooka originally used by the MS-09R Rick Dom. The bazooka is fed by a 10 rounds magazine, and a single round can blow the torso off of an enemy mobile suit.

A large bazooka originally used by MS-09G Dwadge. It is fed by a 5 rounds magazine, and a single round can blow the torso off of an enemy mobile suit. The barrel is fitted with a thermal covering to reduce distortion due to heat.

A hand-carried beam weapon originally used by the AMS-119 Geara Doga, it is powered by a replaceable e-pac. The beam machine gun was used by The Sleeves' Gelgoog.

A weapon that is more powerful than a regular beam rifle. It is possible to fire a pulsed beam, and the destructive power is prioritized over the penetration force. In the case of a single shot, the target can be destroyed with high accuracy because the kinetic energy of the beam is less likely to decay. The sights are also exceptional.

The shield is a thick sheet of armor designed to take severe punishment that would normally destroy a mobile suit, and has an anti-beam coating to protect against beam attacks. Typically, physical shields can only take so much damage before they succumb to the pressure and break. The Gelgoog's shield is arm-mounted and can be stored on the back when not in use.

Wielded by a trio of Gelgoogs in episode 12 of Gundam Build Divers, it is the same shield as used by the RGM-79HC GM Guard Custom. The guardian shield is composed of five layers of composite armor made of four different alloy materials. The shield also has anti-beam coating on its surface to defend against beam weaponry. To increase the guardian shield's combat effectiveness, it also mounts a pair of vulcan guns.

Used by Masai N'gava's Gelgoog, the sand sprayed from this large hose blinds the enemy, making it difficult to close in and attack, even from range.

By the middle of the One Year War, the Principality of Zeon was well aware that the Earth Federation Forces was researching and developing mobile suit projects to counter the Zeon's army of mobile suits. Despite Zeon's advanced mobile suit technology, the appearance of the RX-78-2 Gundam with its beam rifle technology followed by the mass production RGM-79 GMs equipped with the Beam Spray gun quickly negated Zeon's advantage.

The Zeonic company decided that its mobile suits needed to incorporate the vastly superior beam weapons into its mobile suit designs. So, when the plans for the new mobile suit (MS-11 Gelgoog) showed up, they redesigned the plans to be able to use beam weapons. The project implemented development data from the MS-06R-2 Zaku II High Mobility Type, which lost to Zimmad's MS-09R Rick Dom as Zeon's mainstay space combat MS. The plans for the original "MS-11 Gelgoog" only allowed it to use ballistic weapons like the machine gun, and its power output was unable to handle a Beam-based weapon. After redesigning the plans, the mobile suit was capable of using beam-based weapons. Removing the designation "MS-11" and shifting it to the Pezun Project's MS-11 Action Zaku, they redesignated the new mobile suit "MS-14", but retained the name. The initial production Gelgoog is known as the YMS-14 Gelgoog. The United Maintenance Plan was implemented during production of the Gelgoog.[1] The Gelgoog was mainly produced at Granada and A Baoa Qu, with some documents describing the overall number of units being 738.

While the Gelgoog was the most powerful production-type MS of the One Year War by a considerable margin, matching or slightly exceeding the Earth Federation's RX-78-2 Gundam unit, it was never produced in the numbers required to counter the sheer numbers of RGM-79 GMs that walked off the production lines before the end of the war. Full deployment of the Gelgoog was delayed due to full-scale production of the new beam rifle, resulting in only 67 machines participating in the decisive battle of A Baoa Qu.[2] It is possible that if the Gelgoog had been pushed into production even two weeks sooner, it may have been able to secure victory for Zeon.

The last major problem with the Gelgoog was that it had mainly rookie pilots inside the cockpits, as most of Zeon's more experienced pilots had been killed in earlier battles. These novice pilots had seen little or no combat before the Battle of A Baoa Qu, and could not use their Gelgoogs effectively enough to counter the Federation's less powerful GM models, piloted by skilled veterans of the Battle of Solomon. One customized unit would be operated by Erik Blanke, unfortunate for Erik he would have an encounter with the Federation's White Devil and his Gelgoog would be damaged, before he could be killed however the pilot would disengage the battle with him, to pursue the MSN-02 Zeong.

After the war, some units were taken by the Federation to serve as high-performance aggressor trainer units, while others escaped into deep space with various Zeon remnants; the majority had either died at A Baoa Qu or were marched off to the scrapper's torch. Some examples of old MS-14 Gelgoog units survived postwar in museums. During U.C. 0088 one unit would be used by the Blue Team of the African Liberation Front rebel group, and painted in their distinctive light blue-on-blue colors. In U.C. 0096, a number of these mobile suits survived and would be used by "The Sleeves" during the third of the major Neo Zeon Movements. These mobile suits would be repainted into a new color scheme and given the distinctive markings featured on many of the mobile suits used by The Sleeves.

A customized Gunpla built and operated by Rainer Cziommer, its painted in his personal colors and equipped with the MRC-F20 SUMO's flight booster. 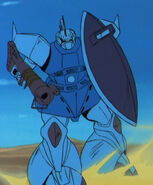 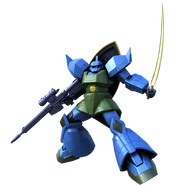 Gato's Gelgoog as featured in Gundam Battle Operation Next 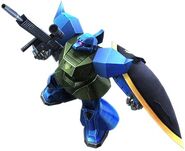 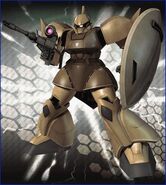 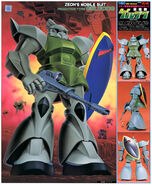 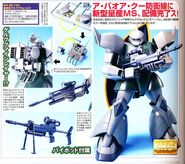 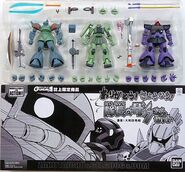 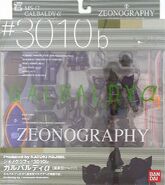 Retrieved from "https://gundam.fandom.com/wiki/MS-14A_Gelgoog?oldid=456439"
Community content is available under CC-BY-SA unless otherwise noted.