The MS-13 Gasshia is a mobile suit that first appeared in original design series MS-X. The unit is piloted by Daru.

Although the Gasshia's body design is derived from the amphibious MS MSM-07 Z'Gok, it is designed for use in low gravity warfare. It is equipped with two ground sensors on the back. The Gasshia is an assault type MS that is normally operated by two pilots.

It is usually employed in assault operations in conjunction with the MS-09R Rick Dom. The Gasshia is equipped with a specialized hammer gun as well as two concealed missile launchers. Like the Z'Gok, the Gasshia has the Iron Nail claws in place of manipulators that are suitable for close range combat. 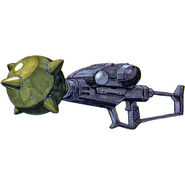 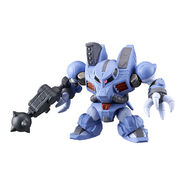 A trio of Gasshias guarding a Dabude land battleship (left) as seen on Gihren's Greed: Menace of Axis V 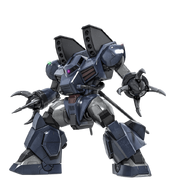