The MS-12 Gigan was a Principality of Zeon prototype artillery mobile suit from the official MS-X mobile suit variations.

The Gigan is a fortress defense MS, and is practically a moving battery. The lower body does not have feet for walking, the Gigan's movement is instead done with three wheels and four auxiliary thrusters. The cockpit is a double-seat type to accommodate the pilot and a gunner. The lower half of the body is replaced with a high mobility vernier for space, allowing it to operate as a space warfare MS, similar to the MSN-02 Zeong. Its main and most prominent weapon was the 180mm recoilless cannon mounted on the top of the Gigan's head, which served as the weapon of choice for long-range bombardment. For use in close to mid-range combat the Gigan also featured a 120mm four-barrel machine gun mounted in the place of its right forearm.

In the year U.C. 0096, the Gigan units deployed by the Sleeves, have had their front two wheels replaced with the same large propellant boosters used by the YAMS-130 Krake Zulu, and the rear wheel has been abolished. The 120mm four-barrel machine gun was also replaced with the same Gatling Gun utilized by their customized MS-21C Dra-C.

The Gigan was one of the few Pezun Project mobile suits to actually be produced and see use outside of Pezun. The Gigan was mass-produced in small quantities and sent to many of the Principality of Zeon's bases for use as guard and defense units. In U.C. 0096, a number of these mobile suits survived and would be used by "The Sleeves" during the third of the major Neo-Zeon Movements. Due to the fact that The Sleeves lacked the resources to compete with the Earth Federation's production capabilities, they deployed any mobile suit they could get a hold of, even outdated machines as far back as the One Year War. These mobile suits would feature modified weaponry and propulsion systems and were also repainted in a new green color scheme and given the distinctive markings featured on many of the mobile suits used by The Sleeves. 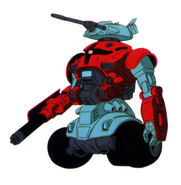 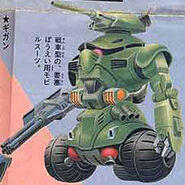 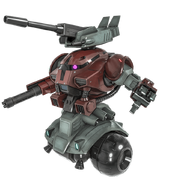 Retrieved from "https://gundam.fandom.com/wiki/MS-12_Gigan?oldid=460183"
Community content is available under CC-BY-SA unless otherwise noted.