The MS-09 Dom Cold Climate Type is a variant of the MS-09 Dom introduced in the mobile suit design series MSV-R.

A mobile suit of the Principality of Zeon's armed forces that was locally modified from the Dom to cold-climate specifications. The backpack has been modified from the one mounted on the Prototype Dom, and contains a larger propellant tank. The Dom Cold Climate Type also has a special sprayer built in that can disperse artificial snow for camouflage, making it possible to cover the upper bodies of three MS with snow in ten minutes. Other features include additional air intakes on the shoulders, abdomen, and legs to cool the thruster engines, the elimination of the scattering beam gun on the chest, and thermal covering on the giant bazooka, all of which are designed for operation in cold climates.

The Dom Cold Climate Type's main close combat weapon, it uses thermal energy to superheat its blade to melt through the armor of an enemy machine. It has an electrical discharge function and can store high charges via the application of Minovsky particle physics. As the heat saber degrades during use, it is discarded after usage. Mounted on the backpack when not in use.

A bazooka for MS that fires rocket-propelled 360mm physical rounds. Liquid fuel supplied through a pipe from the Dom Cold Climate Type's hand is injected as a primary propellant, and then the projectile's speed is increased by rocket motor ignition. It is fed by a 10 rounds magazine, and a single round can blow the torso off of an enemy mobile suit. The barrel is fitted with a thermal covering for the cold environment.

The Dom Cold Climate Type was first spotted in the northeastern part of Great Slave Lake. It was sighted by a Dragonfly pilot from the Yellowknife base during a training flight, and according to the pilot, it was operating alongside two Gouf-type MS. The Dragonfly was unarmed and fled back, but managed to photograph the machine. However, a Fly Manta, which went out after receiving the report, could not confirm any trace of the MS even though it arrived at the same location 10 minutes after the report.

In the forested areas of Canada, there were several other sightings of what seemed to be the Dom Cold Climate Types, but the only information available was unclear about their appearance due to visibility being obscured by the snow and vapor raised by the mobile suits' leg hover units during operation. These machines were then tentatively called "Dom Type 0079NA-CA05" or "Dom Refurbished Type North America 05" by the Federation Forces. 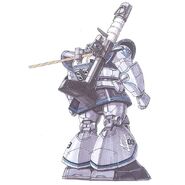