This customized MS-09R Rick Dom was designed specifically for Vice Admiral Dozle Zabi, the commander of the Zeon's Space Attack Force. With mobile suit technology steadily advancing on both sides, customized units of newer mobile suits were often given to ace pilots to replace their aging Zaku's which were quickly becoming outmatched by the Federation's expanding mobile suit forces. It is similar to the standard MS-09R Rick Dom, but with a spiked armor on its shoulders and hands, ornate gold engravings and trim all over its frame, and green colored armor. Also, due to Dozle Zabi's huge size, he had to have the cockpit specially enlarged.

For melee combat the Rick Dom is equipped with a special large heat tomahawk. For long range combat, it can use the standard handheld weapons of the Rick Dom. Finally, a scattering beam gun is built into the chest, which is useless for actually damaging an enemy, but is employed as a diversionary weapon for its ability to blind an enemy's eyes and sensors for several moments, a very useful feature when engaging in close combat which Dozle Zabi often preferred.

A chest mounted scattering beam gun. Does little damage to enemy mobile suits but can be used to blind enemy pilots for several seconds and sensors for several moments.

The primary weapon of the Rick Dom series is a large bazooka. The bazooka is magazine fed and holds 10 rounds per magazine, and a single round can blow apart the torso of an enemy mobile suit.

In UC 0079, before the battle at Solomon, the soldiers stationed at the asteroid base convened a military parade to boost their morale. The military parade consisted of more than one-third of the Space Attack Forces, various mobile suits, and many prominent ace pilots. Dozle Zabi also appeared in the military parade piloting his custom MS-09R Rick Dom while accompanied by two Rick Dom units. There are very few records of the Rick Dom Dozle Zabi Custom confirming its existence at the end of the battle. After the naval review, this machine was apparently deployed in the Battle of Solomon, but it's unknown who was piloting it. The whereabouts of the mobile suit are unknown. 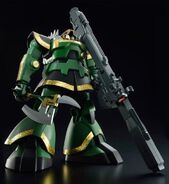 Retrieved from "https://gundam.fandom.com/wiki/MS-09R_Rick_Dom_Dozle_Zabi_Custom?oldid=452451"
Community content is available under CC-BY-SA unless otherwise noted.