The Rick Dom features an improved version of the Dom Type2 heat saber. Stored on the backpack when not in use, this weapon bears a strong resemblance to the beam sabers used by Earth Federation mobile suits, however it still relies on the older technology of using thermal energy to superheat a metal blade, allowing it to melt through the armor of an enemy machine at high speed.

The 120mm machine gun is a standard weapon for Zaku type mobile suits. It is a shell firing gun that does not require energy to be used, however its effectiveness against heavy armor is very limited. The ZMP-50D used a 100-round drum magazine.

A weapon used by Zabi's royal guards, as its name suggests, it is a Lance weapon with a Shield attached to it.  This allows the pilot to switch back and forth between offense and defense. The only downside of this weapon is its heavy weight, which causes the Dom's speed and mobility to be decreased below its usual standards. 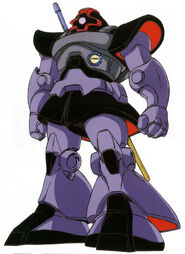 A destroyed Rick Dom, armed with ZMP-50D 120mm Machine Gun
Add a photo to this gallery

Retrieved from "https://gundam.fandom.com/wiki/MS-09R_Rick_Dom?oldid=346559"
Community content is available under CC-BY-SA unless otherwise noted.