The Psycommu Rick Dom's main close combat weapon, it uses thermal energy to superheat its blade to melt through the armor of an enemy machine. It has an electrical discharge function and can store high charges via the application of Minovsky particle physics. As the heat saber degrades during use, it is discarded after usage. 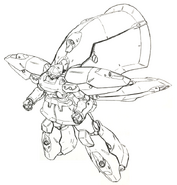 Retrieved from "https://gundam.fandom.com/wiki/MS-09R4_Psycommu_Rick_Dom?oldid=454592"
Community content is available under CC-BY-SA unless otherwise noted.