The Rick Dom II is a product of the United Maintenance Plan and an upgraded version of the MS-09R Rick Dom. Unlike the Rick Dom, which is a space use conversion of the ground-use MS-09B Dom, the Rick Dom II is designed from the beginning to be for space combat, thus its armor and overall form are shaped into flat surfaces as air resistance is nonexistent in space. Its main improvements were overall increased thruster acceleration, along with the addition of more attitude control verniers for improved maneuverability. Combat within the colonies is also taken into account, and it is possible to move hovering under gravity using high-power thrusters. Because of the increased fuel consumption, the Rick Dom II has a pair of external propellant tanks so as to operate in the field longer.

A chest mounted scattering beam weapon. The output of the beam gun has been increased, improving its reliability as a weapon.

The Rick Dom II's main close combat weapon, it uses thermal energy to superheat its blade to melt through the armor of an enemy machine. It has an electrical discharge function and can store high charges via the application of Minovsky particle physics. As the heat saber degrades during use, it is discarded after usage.

The primary weapon of the Rick Dom II, it is a redesigned version of Dom series' 360mm Giant Bazooka, with improved shape charges and firepower. Fed by a 5-round magazine, it is effective in both anti-ship and anti-MS combat, with a single round blowing off a MS' torso easily.

A simplified, disposable rocket launcher. It is commonly used by Zeon mobile suits in the late stages of the One Year War. As the warhead is not equipped with a guidance device, it is extremely hard to use the Sturm Faust to hit a moving target accurately. However, it is still a highly destructive portable weapon. Can be stored on waist armor.

A new heavy bazooka which features powerful rocket-propelled rounds, and improved targeting sensor with protective cover for aiming. It is fed by a 5 rounds clip and spare clips can be carried.

A prototype heat weapon which was developed specifically for anti-ship warfare, its large size and high output allows it to slice Federation warship in two. Used by the Rick Dom II piloted by Guy Helmuth of Marchosias regiment, it was supplied by Zeon's Granada Base.

Very late in the One Year War, the Principality of Zeon launched their United Maintenance Plan to upgrade and improve existing mobile suit designs, and to streamline its own manufacturing capabilities. Several new mobile suit designs were produced from this, including the MS-09R-2 Rick Dom II. The Rick Dom II is an improved version of the MS-09R Rick Dom, and had a significantly higher performance. The redesign put the mobile suit on more even terms with the advanced mobile suits being deployed by the Earth Federation and even the Principality's own MS-14 Gelgoog. As it was designed very late in the war, only very few units were produced.

Despite being built in limited numbers, several of the Rick Dom IIs participated in skirmishes with Earth Federation Forces stationed at Side 6 during December U.C. 0079, the last month of the One Year War. These skirmishes had little overall strategic value and were carried as part of an operation to discover and destroy an advanced Earth Federation mobile suit, the RX-78NT-1 Gundam "Alex", that the Zeon military had tracked from a Federation Antarctic base. Another unit was piloted by Guy Helmuth of Zeon's regiment the Marchosias and carried a large heat saber for close range combat. Guy and his Rick Dom II would participate in the battles of Solomon and A Baoa Qu.

A number of Rick Dom IIs that survived the One Year War made it to the Delaz Fleet, and took part in Operation Stardust. However, some of those units had slightly fewer thrusters, possibly due to the unavailability of replacement parts for the mobile suits. Despite being an antiquated machine, this unit would be deployed in U.C. 0096 by the Zeon Remnants. 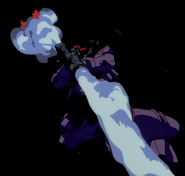 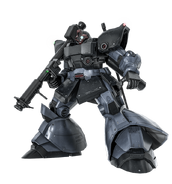 Retrieved from "https://gundam.fandom.com/wiki/MS-09R-2_Rick_Dom_II?oldid=454593"
Community content is available under CC-BY-SA unless otherwise noted.