The MS-09K-2 (MS-09KM) Dom Cannon (aka Dom Cannon Twin Gun Type, Dom Cannon II, Dom) is an artillery ground Mobile Suit from the Universal Century timeline of the Gundam metaseries, It is featured in the original design series Harmony of Gundam variations by Hajime Katoki.

Built during the final days of the One Year War, the MS-09K-2 Dom Cannon was designed as the successor to the MS-09K-1 Dom Cannon. The most obvious difference between the suits is the replacement of the 180mm Long Barrel Cannon with Twin Middle Cannons. The twin cannons added weight caused a slight decrease in the Dom Cannon II's total thrust.

The Type 2 heat saber is a new model of heat weaponry designed for and used by the Dom. Stored on the backpack when not in use, its blade is superheated during use to melt through the armor of an enemy machine.

A small missile launcher attached to the left forearm

An alternative to the 120mm Machine Gun., it used 90mm bullets instead of 120mm type, allowing for a greater firing speed and better penetration capabilities. Fed by a 32 rounds magazine, it is also integrated with a grenade launcher under its barrel for more firepower.

These grenades were more compact than the "cracker" grenades used by the Zaku's. While not very powerful or accurate, they're capable of performing different roles in the battle.

Because of its late development only a handful of these MS were able to be produced before the end of the war. 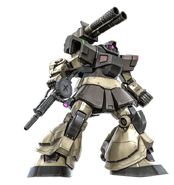 Retrieved from "https://gundam.fandom.com/wiki/MS-09K-2_Dom_Cannon?oldid=434612"
Community content is available under CC-BY-SA unless otherwise noted.