The MS-09K-1 Dom Cannon (aka Dom Cannon Single Gun Type, Dom Cannon I) is a variant of the YMS-09D Dom Tropical Test Type. First featured in the original design series Harmony of Gundam, it later appeared in the manga Mobile Suit Gundam Katana.

The Dom Cannon is a mobile suit developed for anti-air attacks and mid-long range support purposes. It is created using additional produced YMS-09D Dom Tropical Test Type as a base, and incorporates data from the MS-06K Zaku Cannon which by then had been deployed in multiples battles and contributed to several victories.[1] Its main armament is a long cannon on its back, and it was equipped with an arm-mounted triple missile pod as an secondary armament. It is not equipped with a heat saber due to its concept.

Mounted on the right side of the backpack, this artillery cannon is for mid-long range fire support.

Mounted on the left forearm, it is similar to the one used by the MS-06D Zaku Desert Type.

A standard firearm for Zaku type MS. A 100-round drum magazine is mounted on the right side vertically.

The production numbers for the Dom Cannon were small and it was never mass-produced in earnest. 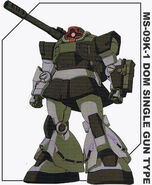 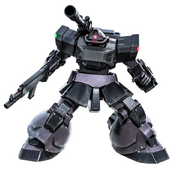