The MS-09H Dwadge Custom is a mobile suit that appears in the Mobile Suit Gundam ZZ series. It is piloted by Desert Rommel.

Once a standard MS-09G Dwadge ground combat mobile suit used during the One Year War, it was heavily modified by its owner, Desert Rommel, leader of Zeon Remnants "The Rommel Corps" still operating on Earth in Africa. Rommel's Dowadge is steadily upgraded over the years following the war's end, and by U.C. 0088, it is redesignated the MS-09H Dwadge Custom and was more formidable than the regular Dwadge.

It is equipped with chemical fuel rocket boosters on the shoulders and a duct for exhaust heat effective in local battles such as tropical areas is newly installed in the crotch, making it possible to continuously demonstrate high mobility without being influenced by the environment. Its generator was also retrofitted and attack power increased due to the implementation of beam weapons, which was a problem for the MS-09B Dom. Its armor and operating system are also upgraded, and the performance is comparable to that of MS of the late 0080's to some extent.

The Dwadge Custom has a pair of Vulcan guns mounted into its head. These projectile weapons are designed for intercepting missiles and destroying lightly armored vehicles, but are ineffective against the armor of a mobile suit.

Stored on the shoulder when not in use, the Heat Saber uses thermal energy to superheat its blade to melt through the armor of an enemy machine. Output 0.52 MW.

A beam weapon mounted in the left side of the Dwadge's chest. As an offensive weapon the scattering beam gun is completely incapable of damaging an enemy machine, but it does produce a bright light capable of momentarily blinding eyes and visual sensors.

A weapon stolen by the Rommel Corps from the Federation after the One Year War.

A large, double-bladed heat weapon exclusive to the Dwadge. Being much sturdier in design compared to the heat saber, it is able to better withstand the high powered impacts of melee combat. Output 0.77 MW.

An external tank used for propellant storage. This extra propellant greatly extends a mobile suit's operating range, and enables it to stay in combat longer. When the propellant is consumed, the tank can be discarded to reduce the mobile suit's weight. This tank uses a two-layered construction, with one layer containing propellant, and the other holding extra coolant.

Despite the aformentioned upgrades, the Dwadge Custom was still considered an obsolete machine when compared to the advanced mobile suits fielded by AEUG in U.C. 0088. It was subsequently destroyed in battle against the Gundam Team when it was defeated by the MSZ-006 Zeta Gundam's Beam Saber. 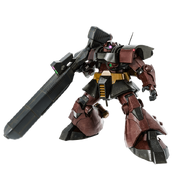