Another variant of the MS-09B Dom, its relationship with the MS-10 Pezun Dowadge is uncertain. It is the final production model of the Dom series. It featured head mounted vulcan guns and external propellant tanks, extending its hover ability. In addition, the rear thermonuclear jet propulsion unit features dust filters and is equipped with a back-mounted antenna to increase communication capabilities. In addition to the heat saber used by most Doms models, the Dwadge can also used a heat tomahawk. The Dwadge also used a slightly larger (380mm) version of the giant bazooka which uses shaped charge ammunition.

The Dwadge has a total of four Vulcan guns mounted into its head. These projectile weapons are designed for intercepting missiles and destroying lightly armored vehicles, but are ineffective against the heavier armor of a mobile suit.

Stored on the backpack when not in use, this weapon uses thermal energy to superheat its blade to melt through the armor of an enemy machine. Output 0.52 MW.

A beam weapon mounted in the left side of the Dwadge's chest. As an offensive weapon the scattering beam gun is completely incapable of damaging an enemy machine, but it does produce a bright light that is capable of momentarily blinding eyes and visual sensors.

A standard weapon of the Dwadge is a large bazooka. The bazooka is fed by a 5 rounds magazine and a single round can blow the torso off of an enemy mobile suit. The barrel is fitted with a thermal covering in order to reduce distortion due to heat.

The same principle with mordern day smoke grenade, this canister-type weapon used as ground-to-ground or ground-to-air signaling devices, target or landing zone marking devices, or as screening devices for unit movements, provide opportunity for the Dwadge to make it way through the ground covered by fire.

A handheld beam weapon originally developed for the RMS-099 Rick Dias. Despite its small size, the pistol is powerful enough to destroy an enemy unit with a single shot.

A large, double-bladed heat weapon exclusive to the Dwadge. Being much sturdier in design compared to the heat saber, it is able to better withstand the high powered impacts of melee combat. Output 0.77 MW.

An external tank used for propellant storage. This extra propellant greatly extends a mobile suit's operating range, and enables it to stay in combat longer. When the propellant is consumed, the tank can be discarded to reduce the mobile suit's weight. This tank uses a two-layered construction, with one layer containing propellant, and the other holding extra coolant.

As the last variant of the MS-09B Dom, the Dwadge enter into service late into the One Year War in limited numbers, with two such units being assigned to Desert Rommel and Karahan of the Rommel Corps stationed in North Africa. It continued to see actions in later conflicts, such as the First Neo Zeon War in U.C. 0088 and was seen used by various parties. Approximately 88 units were produced in conjunction with the MS-09H Dwadge Custom.

In U.C. 0096, at least one of these Dwadge suits were used by Zeon remnants to attack the Federation's Torrington Base in combination with a MS-09F/trop Dom Tropen and a MS-06D Desert Zaku. Its group would later be destroyed by the regrouping Federation Forces during the Federation counterattack. 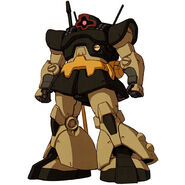 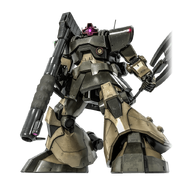 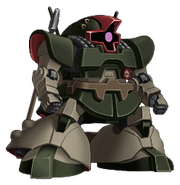 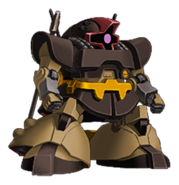