The MS-09F Dom Funf is a variant of the MS-09B Dom and appears in the Mobile Suit Gundam: Zeonic Front video game.

As part of the Zeon's United Maintenance Plan, the Dom Funf's ground combat performance surpasses the Dom, and it is the only Dom variant that can be reconfigured for different environments without major modifications in a few hours. New armaments include a 880mm Raketen Bazooka, a 120mm Assault Rifle, a 90mm machine gun, and forearm-mounted 3-tube missile launchers. The unit was named after five iterations of the previous models (hence the "fünf" which is German for five).

A chest mounted scattering beam gun. Does little damage to enemy mobile suits but can be used to blind enemy pilots for several seconds.

The Dom Funf's main close combat weapon, it uses thermal energy to superheat its blade to melt through the armor of an enemy machine. It has an electrical discharge function and can store high charges via the application of Minovsky particle physics. As the heat saber degrades during use, it is discarded after usage.

As the Dom Funf was developed late in the One Year War, very few units were made and dispatched for combat. One unit was assigned to 2nd Lt. Sophie Fran of the Midnight Fenrir Corp who used it during the final days of the war on Earth. Its versatility served as the basis for subsequently developed Dom models including the MS-09F/trop Dom Tropen and MS-09F/Br Dom Barrage. 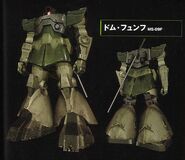 Retrieved from "https://gundam.fandom.com/wiki/MS-09F_Dom_Funf?oldid=454601"
Community content is available under CC-BY-SA unless otherwise noted.