The MS-09F/trop Dom Tropen is a mass-production ground combat mobile suit first featured in the OVA Mobile Suit Gundam 0083: Stardust Memory. Its design was later updated in the novel Mobile Suit Gundam Unicorn. The unit is piloted by Gaily and Adamski.

A redesigned version of the MS-09F Dom Funf, the Dom Tropen was developed to operate exclusively in tropical regions on Earth, in particular the desert areas. Introduced by the Zeon military late in the One Year War, it also incorporated data taken from the MS-09B Dom and YMS-09D Dom Tropical Test Type. Compared to previous Doms, it is a machine that takes into consideration aerodynamic shape and maintainability. The mobile suit featured modified intake filters for its leg-mounted thermonuclear jet engines, allowing it to retain its high ground hovering speeds without fear of sand ruining the engines. In addition to dustproof air filters and enhanced cooling devices in various parts of its body for desert and hot weather specifications, the Dom Tropen has specialized block-shaped armor designed to facilitate the removal of sand that enters the interior. Armament compatibility has also been thoroughly improved, making it possible to equip anything other than beam weapons.

The Dom Tropen's main close combat weapon, it uses thermal energy to superheat its blade to melt through the armor of an enemy machine. It has an electrical discharge function and can store high charges via the application of Minovsky particle physics. As the heat saber degrades during use, it is discarded after usage. Mounted on the side of the backpack when not in use.

A weapon originally used by Zeon's Zaku type MS. It is primarily for anti-ship combat and displays its power in hit and run attacks. It can also be used against enemy mobile suits, but it is harder to hit a constantly moving target.

A bazooka for MS that fires rocket-propelled 360mm physical rounds. Liquid fuel supplied through a pipe from the Dom Tropen's hand is injected as a primary propellant, and then the projectile's speed is increased by rocket motor ignition. It is fed by a 10 rounds magazine, and a single round can blow the torso off of an enemy mobile suit.

A throwing weapon that can be set to detonate upon impact with the target or timed to explode after a preset time. They come in multiple variants, allowing them to perform different roles in battle.

During the One Year War, one unit was assigned to Lt. Sandra of Midnight Fenrir Corps, while another unit was piloted by her former Fenrir teammate Sophie Fran during Operation Silver Lance in U.C. 0084. Another two units, piloted by Delaz Fleet's Gaily and Adamski, would participate in the theft of the RX-78GP02A Gundam "Physalis" from the Earth Federation Forces's Torrington Base in October U.C. 0083. Another four units were seen aiding the defense of Zeon's underground Kimberlite Base in eastern Africa.

In U.C. 0096, at least one more of these suits was used by Zeon remnants to attack the Federation's Torrington Base in combination with a MS-09G Dwadge and a MS-06D Desert Zaku. Its group would later be destroyed by the regrouping Federation Forces during their counterattack. 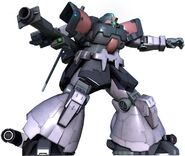 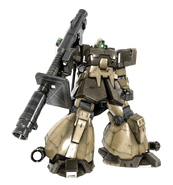