The MS-09F/Gb Dom Gross Beil is a mobile suit featured in the SD Gundam series of video games.

The Dom Gross Beil is a high mobility, space-use, close combat unit, with conflicting sources listing it as either a variant of the MS-09R Rick Dom or the MS-09F Dom Funf. It was designed at the same time as the MS-09F/trop Dom Tropen and shared multiple similarities such as the shape of its armor. The biggest difference with the ground-use Dom Tropen is that multiple thrusters are added to the Dom Gross Beil's legs to ensure high mobility in space. Its mobility in space is comparable to that of the MS-14B Gelgoog High Mobility Type.

The Dom Gross Beil's primary close combat weaponry, its shape resembles the Japanese tool known as 'Nata'. Its grip section has a trigger for activating a built-in thruster located above the grip, on the side of the weapon. It is intended that with the added speed from this thruster, the Large Heat Saber can cleave apart any mobile suit in one hit. When not in use, it is stored on a special mount rack located on the Dom Gross Beil's right shoulder.

The Dom Gross Beil's secondary close combat weaponry, it is a small knife that can be heated for increased damage. When not in use, it is stored in a sheath located on the left shoulder.

During the One Year War, as the Zimmad began working on a new mobile suit development plan, it got wind that Principality of Zeon was going to order more Gelgoogs. In an attempt to delay or stop the order for more Gelgoogs, Zimmad revised the development plan to ensure it would surpass the Gelgoog's performance and this resulted in the creation of two mobile suits: the MS-09F/Bn Dom Bein Nichts and the MS-09F/Gb Dom Gross Beil. Unfortunately, the time taken for the revisions resulted in a delay for the two mobile suit's development and manufacture. This proved to be fatal for both machines as the war ended just as their design was on the verge of completion. Thus, both Dom Bein Nichts and Dom Gross Beil were never produced. 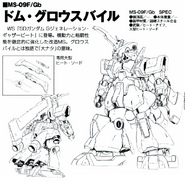 Retrieved from "https://gundam.fandom.com/wiki/MS-09F/Gb_Dom_Gross_Beil?oldid=454465"
Community content is available under CC-BY-SA unless otherwise noted.