The MS-09F/Br Dom Barrage is a variant of the MS-09B Dom that appears in Mobile Suit Gundam: The Blazing Shadow.

A heavy type MS based on the MS-09F Dom Funf, it was developed independently at Hell's Gate after the One Year War. In response to both ground and space warfare, large thrusters are added to compensate for the loss of maneuverability due to the addition of heavy armor. It is armed with a new gatling cannon and missile launchers mounted in the skirt armor as part of its built-in weaponry. The end result is a top-class MS that possesses high firepower. 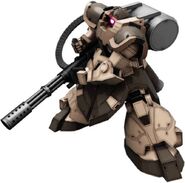 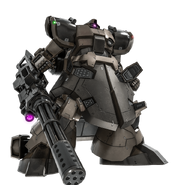 Retrieved from "https://gundam.fandom.com/wiki/MS-09F/Br_Dom_Barrage?oldid=473737"
Community content is available under CC-BY-SA unless otherwise noted.