The MS-09F/Bn Dom Bein Nichts is a mobile suit that appears in the SD Gundam series of video games.

A high mobility, space-use, Dom-type mobile suit, conflicting sources have listed the Dom Bein Nichts as either a variant of the MS-09R Rick Dom or the MS-09F Dom Funf. As implied by its name, "Bein Nichts", which is German for "No Legs", the primary characteristic of this unit is its legs are replaced by large, high mobility thrusters. Due to this change, the Dom Bein Nichts obtained a high level of mobility comparable to that of a mobile armor. As the large, high mobility thrusters are mounted at an angle, the Dom Bein Nichts tends to tilt forward when moving and because of this, the movement range of its head-mounted mono-eye is extended to the top of the head. Its cockpit is also relocated to the waist section.

The Dom Bein Nichts is mainly armed with ranged weaponry so that it can support the MS-09F/Gb Dom Gross Beil, which has poor ranged attack capabilities. Both mobile suits are designed at the same time and born from the same development plan, but unlike the ace pilot-use Dom Gross Beil, the Dom Bein Nichts can be used by normal pilots. Its armament consisted of a Raketen Bazooka as the primary firearm, a chest-mounted Scattering Beam Gun modified to be movable, multiple Sturm Fausts carried on several weapon racks located on the lower body and a Heat Saber for close combat. The weapon racks can carry other weapons instead of the Sturm Fausts if the need arises.

The Dom Bein Nichts' main close combat weapon, it uses thermal energy to superheat its blade to melt through the armor of an enemy machine. It has an electrical discharge function and can store high charges via the application of Minovsky particle physics. As the heat saber degrades during use, it is discarded after usage.

A simplified, disposable rocket launcher. As the warhead is not equipped with a guidance device, it is extremely hard to use the Sturm Faust to hit a moving target accurately. However, it is still a highly destructive portable weapon. The Dom Bein Nichts can carry multiple Sturm Fausts on the weapon racks located on its lower body.

During the One Year War, as the Zimmad began working on a new mobile suit development plan, it got wind that Principality of Zeon was going to order more Gelgoogs. In an attempt to delay or stop the order for more Gelgoogs, Zimmad revised the development plan to ensure it would surpass the Gelgoog's performance and this resulted in the creation of two mobile suits: the MS-09F/Gb Dom Gross Beil and the MS-09F/Bn Dom Bein Nichts. Unfortunately, the time taken for the revisions resulted in a delay for the two mobile suit's development and manufacture. This proved to be fatal for both machines as the war ended just as their design was on the verge of completion. Thus, both Dom Bein Nichts and Dom Gross Beil were never produced. 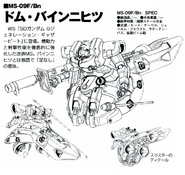 Retrieved from "https://gundam.fandom.com/wiki/MS-09F/Bn_Dom_Bein_Nichts?oldid=454599"
Community content is available under CC-BY-SA unless otherwise noted.