The MS-08TX/N Efreet Nacht is a variant of the MS-08TX Efreet. It first appeared in the video game Mobile Suit Gundam: Battlefield Record U.C. 0081.

A modified version of the close-combat mobile suit MS-08TX Efreet, the Efreet Nacht, as its name suggested ("nacht" being German for "night"), was specialized for stealth operations and night combat.[1] It was equipped with a powerful jamming system, capable of disrupting radar and mobile suit sensors.[2]

In order to improve stealth properties, the air ducts on the Efreet Nacht's chest were removed, and it was equipped with a new backpack capable of retracting its thrusters. A pair of twin thruster units were equipped on its legs, improving its thrust.[3]

In order to avoid heat detection, its primary weapon was changed from the heat saber to a ninjato-style physical sword called Cold Blade. For ranged combat, it was equipped with four Cold Kunai for throwing, as well as a three-barrel Gatling gun concealed in the left forearm.[1]

Also known as "Nacht Blade", the Cold Blade is a ninjato-style physical blade. As its name suggests, it is not heated in order to avoid heat detection.[1] It appeared to have been treated with anti-beam coating, as it was capable of clashing with beam sabers.[4] The Efreet Nacht was also able to wield two of these blades at the same time.[5]

A set of small physical blades which serve as throwing weapons. Upon impact, it releases high voltage electricity into the target, causing damage to internal mechanics and potentially the pilot.[4] The Efreet Nacht had four cold kunai, two stored on the legs and two on the side skirt armor.

A fixed ranged weapon mounted in the left forearm. It is primarily used to assist in close combat.

The Efreet Nacht was equipped with an advanced jamming system. In addition to radar jamming, it was also capable of disrupting both heat signature and sound detection.[6]

Originally one of eight Efreet units produced, this unit was transferred to Odessa during the One Year War and extensively modified under the order of Colonel M'Quve, becoming a specialized stealth and night combat mobile suit. It received a new designation: Efreet Nacht. However, after Zeon's defeat during Operation Odessa, the Efreet Nacht was left behind and captured by the Earth Federation Forces.[7] The stealth technology obtained from it would later be used in the development of the RX-79BD-1ST Blue Destiny Unit 1 (Stealth).

In U.C. 0081, the Invisible Knights, a group of Zeon Remnants operating on Earth, learned of the Efreet Nacht's presence in Odessa and launched an attack on the Federation-occupied Odessa Base in order to capture it. Team leader Erik Blanke captured the mobile suit and immediately used it to devastate the Federation Forces, fighting off the responding Phantom Sweep Corps before withdrawing.

After its recapture, the Efreet Nacht was out of action for several missions due to the maintenance required by its complex systems. However, its maintenance was finished just in time for a mission to the Indochinese Peninsula, where a jungle base vital to the operation of Zeon Remnants worldwide was discovered by the Federation. As the loss of the base would make Operation Tears of Varuna impossible, the Invisible Knights were deployed to protect it.

During the mission, the Invisible Knights encountered the Phantom Sweep Corps once again. Erik, piloting the Efreet Nacht, clashed with the RX-81LA G-Line Light Armor piloted by Phantom Sweep commander Hugues Courand. Invisible Knights member Fritz Bauer attempted to shoot Courand, but was shot and killed by Cherie Allison's RX-81ST G-Line Standard Armor. Erik was shocked to hear that the pilot who killed Fritz was named Cherie, knowing that it was the pseudonym assumed by his childhood friend, Tatiana Doerr, when she left for Earth. Realizing that the battle is not in their favor, the Invisible Knights then decide to make a tactical retreat.

Afterwards, the Invisible Knights were sent up to space in an HLV from Aden Base, and the Efreet Nacht, which was only usable on land, had to be abandoned. However, one of the Invisible Knights' veterans, Maintenance Chief Christo Doerr, sortied in the Efreet Nacht to defend the HLV from the pursuing Phantom Sweep Corps. He was eventually defeated by the G-Line Light Armor piloted by Hugues, but Christo tried to take Hugues with him. However, his sister Tatiana interfered to save Hugues, and both siblings were caught up in the self-destruction of the Aden Base.

Efreet Nacht as featured in Mobile Suit Gundam: Bonds of the Battlefield 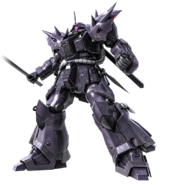 Inside Odessa Base hangar 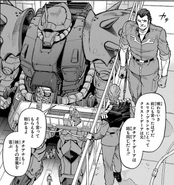 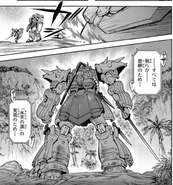 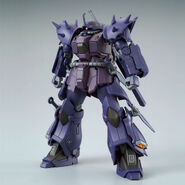 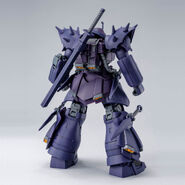 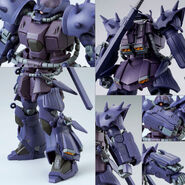 Efreet Nacht: design and specifications (from The Wrath of Varuna)