The MS-08TX[EXAM] Efreet Custom (also known as "Iflyte" in the manga) is a Zeon mobile suit which first appeared in Mobile Suit Gundam Side Story: The Blue Destiny. It was piloted by Nimbus Schterzen.

The Efreet Custom is a modified version of one of the eight MS-08TX Efreets that were manufactured, and is equipped with the EXAM System. The Efreet was chosen as the base unit because no other machines could withstand the EXAM System. Compared to the original Efreet, the Efreet Custom has a larger head unit without Vulcan guns, and this was to accommodate the first EXAM System and its associated cooling units. The mobile suit also has improved mobility due to a reduction in weight and more powerful thrusters, as well as higher offensive power, making it more powerful than the original Efreet. Additionally, its close combat capabilities surpassed that of the MS-07 Gouf.

When the EXAM System is activated, Efreet Custom's already high levels of performance and mobility are boosted even further, allowing it to match newer mobile suits. However, it quickly overheats when using this system and to overcome this issue, the mobile suit's cooling system are enhanced. Spare parts are also hard to procure for this mobile suit due to the low production number of the Efreets. Parts from the Gouf series, which has a close lineage, could be used, but they are still subjected to the severe wear and tear caused by the EXAM System. Despite having excellent performance, it was said that the Efreet Custom failed to meet the expectations of its developer, Chlust Moses, who then defected to the Earth Federation in order to develop a higher performance machine.

The symbolic weapon of the Efreet Custom, two heat swords can be stored on the side armor or on the backpack. Nimbus, the Efreet Custom's pilot, mainly fights with these two swords, demonstrating the mobile suit's high fighting ability. By heating the sword's blade to red hot, it can easily cut through MS armor, but it can also be used for cutting like a normal machete when not heated.

Equipped on both forearms. The main purpose of this weapon is to intimidate and restrict the enemy's movements, but it is also powerful enough to destroy parts of the enemy's machine as well as disable their handheld weapons.

Mounted on both legs, the pods are discarded after the missiles are fired to reduce the mobile suit's weight.

A system that gave normal pilots the ability to mimic the power of Newtypes. While little is known about the mechanics of the system, the primary component is known to have been the captive soul of Newtype Marion Welch. The conflict of her soul with the bonds of the system made it extremely unstable and hard to control, to the point that the system - and the mobile suit - would sometimes go berserk. While under the influence of the EXAM System, the mobile suit's optical sensors would glow red.

In the game, Nimbus boards the Efreet Custom and pursues Chlust Moses, who has defected to the Earth Federation, but is stranded after a mortal battle with RX-79BD-1 Blue Destiny Unit 1, a machine equipped with the EXAM system developed by Chlust for the Earth Federation Forces. However, Nimbus seizes the opportunity and destroys Unit 1's head with a grenade, and soon after, the Efreet Custom also explodes.

In the novel, right after Nimbus decides that the battle is not in his favor and escapes by abandoning the Efreet Custom, it interferes with Unit 1 on autopilot, but is pierced in the head by a beam saber and stops functioning.

In the manga, the Efreet Custom's legs had originally been severely damaged, and Nimbus' piloting skills had minimized the burden on the machine, but during the battle with Blue Destiny Unit 1, the damage to the legs reached its limit and the Efreet Custom was defeated. 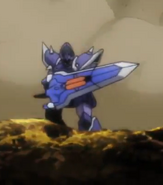 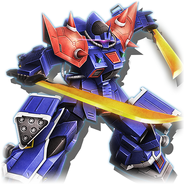 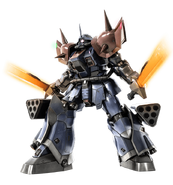 Color art for RE/100 model release: front and rear view 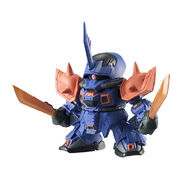 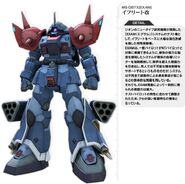