To overcome the issue of mobile suits requiring aerial transport for long range movements while on earth and thus hindering their deployment, the Zeon military initiated a program to develop an atmospheric flight-capable mobile suit. The program acquired three YMS-07A Prototype Gouf and one YMS-07B Gouf and modified them into four identical MS-07H Gouf Flight Test Types. To achieve sustained atmospheric flight, the experimental Gouf Flight Test Type has aerodynamic control surfaces on its backpack and its legs are fitted with thermonuclear rocket engines as well as enhanced rocket verniers. Its armaments include two hand-mounted 5-barrel 75mm machine guns, four 180mm rocket cannons on the legs and a handheld 360mm giant bazooka.

The four Gouf Flight Test Types conducted 38 test flights in four weeks and multiple flaws were discovered, such as the inability to maintain a constant cruising speed while flying and having low flight range due to its heavy weight. To resolve these issues, the Gouf Flight Test Types were reworked several times, with the last incarnation being the MS-07H-4 model before the program was finally scrapped. After the One Year War, the Earth Federation Forces captured the Gouf Flight Test Type's design plan and produced a limited number of modified units for their own use. The modifications include the installation of the panoramic monitor and linear seat in the cockpit, and the use of thermonuclear jet engines in the legs instead of thermonuclear rocket engines.

Machine guns built into the fingers of the manipulators on both arms.

Two rocket cannons are mounted on the side of each leg.

Four Gouf Flight Test Types were produced at Side 3's 29th colony and transported to Earth via Musai-class cruisers. They first arrived at the Zeon's captured California Base and later transferred to an air force base in Arizona for extensive test flights. During the test flights, multiple issues were found and the Gouf Flight Test Types were redesigned several times, with the last incarnation being the MS-07H-4 model before the program was finally scrapped.

When the Earth Federation Forces reclaimed California Base, they acquired the Gouf Flight Test Type's design plan and produced a limited number of modified units for their own use. During the Gryps War in UC 0087, 4 such units were deployed by the Earth Federation Forces to defend Jaburo. They were seen hovering across the ground instead of flying when fighting in vain against the invading AEUG forces.

As featured in Gundam Chronicle Battleline 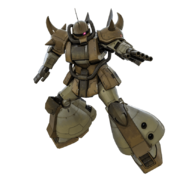