The MS-07H-8 Gouf Flight Type is a mobile suit introduced in the animne Mobile Suit Gundam: The 08th MS Team.

The final model of the MS-07H series, the MS-07H-8 Gouf Flight Type inherited the design concept of the MS-07H-4 Gouf Flight Test Type, and was built using parts from the MS-07B-3 Gouf Custom. Unlike the earlier Gouf Flight Test Types, the Gouf Flight Type featured thermonuclear jet engines in its legs instead of thermonuclear rocket engines, and its backpack and waist were fitted with more powerful thrusters. Additionally, movable stabilizer wings were installed on the backpack and waist armor, improving its aerial attitude control capabilities. Overall, the Gouf Flight Type managed to achieve excellent flight performance and was one of the more successful machines in the MS-07H series. However, its flight range and mobility were still below expectations, resulting in Zeon's development of mobile suit with flight capabilities to end with this machine.

Instead of having machine guns built into its fingers like its predecessors, the Gouf Flight Type mounts a triple-barreled Gatling Gun on its left forearm. This allows the mobile suit to be equipped with normal manipulators for better versatility. Additionally, the magazine of this Gatling Gun can be replaced when empty, overcoming the issue with the finger machine guns' magazine being built into the forearms and cannot be replaced easily in battle. Despite the Gatling Gun's small caliber, the weapon is capable of damaging enemy mobile suits at close range. The Gatling Gun also contains a hardpoint for mounting the shield.

The Gatling shield is combination of a Gatling Gun with a modified MS-07B Gouf shield, and grants both offensive and defensive power in one single weapon. It also stores a Heat Sword Type D III, and can be mounted directly on the left forearm or on top of the 35mm Gatling Gun.

The 75mm Gatling Gun featured a cyclic, 6-barrel design which facilitated cooling and synchronized the firing-reloading sequence. This configuration allowed higher rates of fire to be achieved without the barrel overheating. The Gatling Gun's concentrated shots and high penetration power could easily destroy Federation's mobile suits, such as RX-75 Guntank Mass Production Type. The 75mm Gatling Gun was drum-and-belt fed, with the entire set being welded onto a specially-designed frame to be mounted onto Gouf Flight Type's shield. It was fired via a hand-held trigger which was controlled via a normal MS manipulator. The Gatling Gun can be ejected if its ammunition was depleted, or whenever its weight proved to be a hindrance when its pilot needed speed and maneuverability during aerial combats.

The same type of heat sword as used by MS-07B-3 Gouf Custom, it is a sword-like weapon with a blade that is heated to high temperatures to increase its cutting capacity. It is stored under the Gatling Shield, with the handle sticking out from the top.

At least four MS-07H-8 Gouf Flight Types were known to exist. Two were built and stationed at Ginias Sahalin's Southeast Asian base in U.C. 0079. They were used to escort the Apsaras III when the massive mobile armor rose out of the mountain. When Aina Sahalin forced a ceasefire with the Earth Federation Forces, she allowed the pilots of the Gouf Flight Types to rendezvous with the Zanzibar-class Kergeren that was taking off and returning to space. However, when the Zanzibar-class was destroyed by a RGM-79(G) GM Sniper, one of the Goufs was destroyed while the other, damaged but still operational, was destroyed shortly after. The third unit was featured in Mobile Suit Gundam: The 08th MS Team - Battle in Three Dimensions, ambushing EFF's 08th MS Team while they were on their way to attack Zeon's Southeast Asian base. In the ensuing battle, it was defeated by Shiro Amada's RX-79(G)Ez-8 Gundam Ez8. In U.C. 0096, another Gouf Flight Type unit appeared. This unit was used by an unknown group of pirates who stormed and occupied Zeon remnant's base in New Guinea. 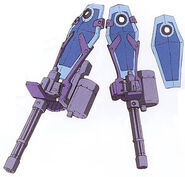 A pair of Gouf Flight Types escorting the Apsaras III

As featured in Gundam Chronicle Battleline 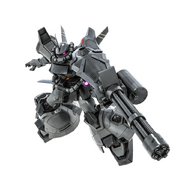