The MS-07G-2 Gouf Tactical Assault Type is a redesigned MS-07B Gouf with emphasis on increased fire power. It is equipped with a Gun Pack on the left arm which contains various weapons and has a back-mounted 120mm Gatling Gun. The frame structure has been redesigned to suppress the weight gain, and the addition of thrusters to the legs has succeeded in maintaining maneuverability.

A composite firearm equipped on the left arm. The Gun Pack contains a machine gun, a medium-range rifle, a flamethrower, and a small rocket launcher.

Stored in the right arm is a tentacle-like heat rod weapon. The heat rod could be superheated to give it cutting properties. If the heat rod is not used as a slicing weapon it can be used to grapple enemy units and is capable of delivering an electric shock upon contact.

A medium-range weapon mounted on the back for anti-air and anti-ground attacks.

A defensive armament that can be attached to the left forearm. Its main purpose is to defend in close combat rather than at long range. It also stores the suit's melee weapon - the heat sword.

A melee weapon mounted on the back of the shield. Like the Zaku's heat tomahawk, the heat sword's blade is heated to high temperatures to increase its cutting capacity. Initially, the weapon's blade is made of a polymer compound that has undergone a shape memory treatment, and thus is stored inside the weapon's grip when not in use and upon heating, will expand out of the grip and took on the shape of the heat sword's blade. This polymer compound was later replaced by easier to produce ceramic materials.

38 Gouf Tactical Assault Types were manufactured and primarily used in force reconnaissance operations. It is known to have seen combat along with the MS-07G-1 Gouf Vijayanta in North America in November, U.C. 0079. 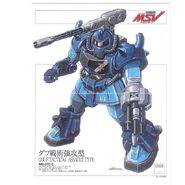