The Gouf Test Prototype was a modified MS-07B Gouf developed by the Zimmad Company to collect data for the YMS-09 Prototype Dom. The mono-eye rail on the head has been replaced with a cross-shaped rail, and all fixed armaments have been eliminated. The output of the backpack thrusters has been enhanced, and auxiliary propulsion engines added to the legs. The spikes on the shoulder armor were reduced in size, and the pipes on the waist removed.

The Gouf Test Prototype's main close combat weapon, it uses thermal energy to superheat its blade to melt through the armor of an enemy machine. As the heat saber degrades during use, it is discarded after usage. Mounted on the backpack when not in use.

A defensive armament mounted on the left forearm. Its main purpose is to defend in close combat rather than at long range.

Only one Gouf Test Prototype was constructed during the One Year War, and served as a testbed for new innovations in mobile suit design, never seeing any actual combat. The data gathered from the Gouf Test Prototype was compiled and several of the new technologies tested with it would become standard issue when the Zimmad Company created their next mobile suit, the MS-09 Dom. 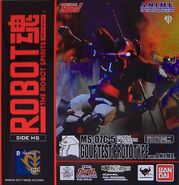 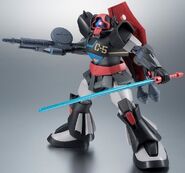