Shortly after its initial introduction, the MS-07A Gouf was replaced by the completed MS-07B Gouf model. The B-type Gouf easily outstripped the MS-06F Zaku II in terms of speed, power output, and melee combat ability. But the mobile suit's overall improvement was not great enough to be justified by its increased cost. The Gouf's production was cut short by the development of a more cost efficient unit, the more powerful and nimble MS-09B Dom. Despite its very short production run, it was still deployed across the world alongside Zakus and Doms. One customized unit was assigned to Colonel M'Quve, which was painted in a two-tone baby blue on royal blue color schemes with ornate gold engravings and trim all over its frame. The head of M'Quve's Gouf also features a custom spearhead-like commander antenna in place of the usual Zeon's arrow-style antenna.

The MS-07B Gouf's regular left manipulator is replaced by a five-barrel 75mm machine gun shaped like enlarged fingers. It fires physical rounds at a rapid rate, and despite its bulky and awkward appearance, its barrels demonstrate limited degree of digital dexterity, including the ability to hold the shield, and to adequately grip the heat sword and various firearms.

An optionally fixed armament of the Gouf was a defensive shield attached to the left arm, which stored its melee weapon the heat sword.

A melee weapon originally developed for the Gouf series. Like the Zaku's heat tomahawk, the heat sword has a blade that is heated to high temperatures in order to increase its cutting capacity. The heat sword however has a longer reach and hence a greater range of attack than the heat tomahawk. Initially, the weapon's blade is made of a polymer compound that has undergone a shape memory treatment, and thus is stored inside the weapon's grip when not in use and upon heating, will expand out of the grip and took on the shape of the heat sword's blade. This polymer compound was later replaced by easier to produce ceramic materials. The heat sword is sometimes referred to as heat saber.

A close-range weapon installed in the right arm of the Gouf. This retractable cable delivers a high-voltage electrical shock when it comes into contact with an enemy mobile suit, damaging its internal systems and stunning its pilot. The heat rod could also be superheated to give it cutting properties.

During the One Year War, it was very common for high ranking Principality of Zeon officers and ace pilots to receive personally customized mobile suits. One such unit was the personal MS-07B Gouf of Colonel M'Quve, commander of the Zeon mining facilities at Odessa, Ukraine. M'Quve's Gouf was functionally equivalent to a standard Gouf, but it was decorated with many ornate gold markings and engravings, and a custom spearhead-like command antenna that would eventually be carried over to the YMS-15 Gyan, which M'Quve personally designed. 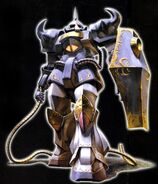 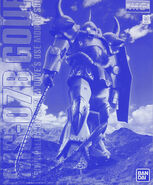 Retrieved from "https://gundam.fandom.com/wiki/MS-07B_Gouf_M%27Quve_Custom?oldid=455558"
Community content is available under CC-BY-SA unless otherwise noted.