The MS-07A Gouf is an pre-production model of the Gouf. It was manufactured after the development of the YMS-07B, but as the Gouf's fixed armaments have yet to enter production then, both of its arms were fitted with normal manipulators instead.

A defensive armament that can be attached to the left forearm. Its main purpose is to defend in close combat rather than at long range. It also stores the suit's melee weapon - the heat sword.

A melee weapon stored on the back of the shield. Like the Zaku's heat tomahawk, the heat sword has a blade that is heated to high temperatures to increase its cutting capacity. Initially, the weapon's blade was made of a polymer compound that had undergone a shape memory treatment, and is stored inside the weapon's grip when not in use. Upon heating, the polymer will expand out of the grip and take on the shape of the heat sword's blade. This polymer compound was later replaced by easier to produce ceramic materials.

32 units were known to have been produced, with one assigned to Lou Roher of the Midnight Fenrir Corps. 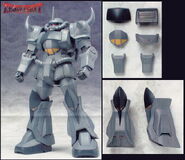